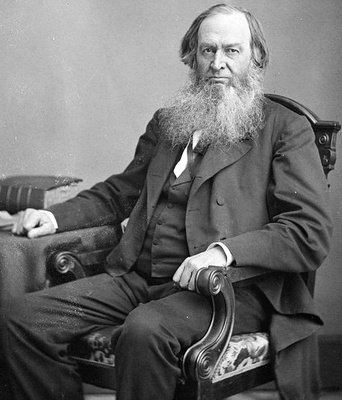 Gerrit Smith was a social reformer, abolitionist, politician, and philanthropist; he ran unsuccessfully for President of the United States in 1848, 1852, and 1856. He was an early owner of some of the land upon which Saranac Lake was built.

Smith, a significant financial contributor to the Liberty Party and the Republican Party throughout his life, spent much time and money working towards social progress in the nineteenth century United States. He was involved in the Temperance Movement and, later in life, the colonization movement. A staunch abolitionist, he was a member of the Secret Six that financially supported John Brown's raid at Harpers Ferry, West Virginia.

An opponent of land monopoly, he gave numerous farms of 50 acres each to indigent families. In 1846, hoping to help black families become self-sufficient and to provide them with the property ownership needed to vote in New York, Smith attempted to colonize approximately 120,000 acres of land in North Elba with free blacks. The difficulty of farming in the Adirondack region, coupled with the settlers lack of experience in housebuilding and the bigotry of white neighbors, caused the experiment to fail.

Smith furnished money for the legal expenses of persons charged with infractions of the Fugitive Slave Law. He financially supported John Brown, to whom he sold a farm in North Elba. In 1859, Smith joined the Secret Six, a group of wealthy northern abolitionists, who supported Brown in his efforts to capture the armory at Harpers Ferry, West Virginia (then Virginia) and arm the slaves. After the failed raid on Harpers Ferry, Senator Jefferson Davis unsuccessfully attempted to have Smith accused, tried, and hanged along with Brown. Upset by the raid and aftermath, Smith suffered a mental breakdown, and for several weeks was confined to the state asylum in Utica.

When the Chicago Tribune later claimed Smith had full knowledge of Brown's plan at Harper's Ferry, Smith sued the paper for libel, claiming that he lacked any such knowledge and thought only that Brown wanted guns so that slaves who ran away to join him might defend themselves against attackers. Smith's claim was countered by the Tribune, which produced an affidavit, signed by Brown's son, swearing that Smith had full knowledge of all the particulars of the plan, including the plan to instigate a slave uprising. In writing later of these events, Smith said, "That affair excited and shocked me, and a few weeks after I was taken to a lunatic asylum. From that day to this I have had but a hazy view of dear John Brown's great work. Indeed, some of my impressions of it have, as others have told me, been quite erroneous and even wild."

Colonel Milote Baker and his son-in-law Ensine Miller purchased from Gerrit Smith Lot No. 11, which spans the Saranac River near the Baker Bridge; Miller retained the western half, where he opened the second store in Saranac Lake, across the river from the first, owned by Baker.

Smith's private gifts to charity were substantial; although he kept no record of his gifts, their value is said to have exceeded $8,000,000. Though a man of great wealth, his life was one of marked simplicity.

Gerrit Smith's "Negro Colony" was an interesting innovation in trying to find homes for this unfortunate race. Smith brought several families into the town. The deeds were worded something like this: "In consideration of $1.00 and the grantor's desire to have all share in the means of subsistence and happiness which a bountiful God has provided for all." There were at least seven families—Morehouse, Hodge, Smith, Wicks, Hazard, Thomas and Runyon. One of them, Smith, settled first at Elbow Pond but soon moved out to the turnpike. Hodge settled near a hill about mid-way between the Loon Lake hotel and Inman station, which still bears his name, "Hodge Hill." Poor fellows! They were soon frozen and starved out and disappeared in search of "sunnier climes." Only the Morehouse family stuck it out for many years. They had located down the hill from the hotel just opposite the present home of Charles Stickney. Some years ago, stones and old rose bushes marked the spot, but they have disappeared now. Hazard lived near Bloomingdale. Mrs. Jane Jones many years a resident of Malone, was a daughter of the old Morehouse colonist. When a girl 15 or 16 years old she worked for Paul Smith in his hotel at Loon Lake. Mrs. Jones was a fine woman and had the love and respect of everyone who knew her! She worked for many prominent families in Malone though she maintained her own home. She was an ardent and devoted Episcopalian and at her death it was found that out of her meager savings she had left $500 to the church. Part of these colored people were escaped slaves. It is said that Thomas' former master located him and sent agents to apprehend and turn him to slavery but the agents were warned by the white people that Thomas was armed would never be taken alive, and that they would also stand by Thomas. The agents abandoned the effort and turned back.