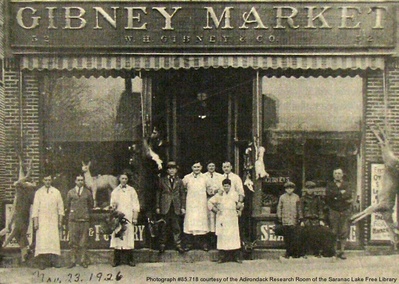 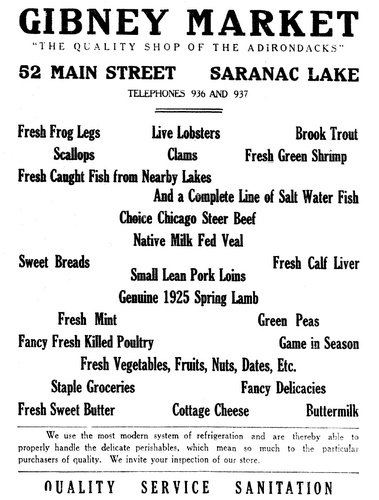 Gibney's Market was located at 52 Main Street, starting about 1917. This was one of those places that has become a local legend.

The market was owned by William H. and Nellie L. Gibney, and by all accounts, Nellie was the "brains" behind the operation. She had been a teacher at the High School, but, more importantly, she was a LaTour. The LaTours were a local family of shrewd and energetic individuals. They had considerable political pull (Nellie's brother, James, was an Assemblyman) and were well connected socially.

The Gibneys loved a high lifestyle and they catered to people of like mind to whom money was no object. Their store was exclusively a meat market. In the center of the floor was a large, mosaic tile image of a pig. They sold the very best of beef and pork, etc.; but their specialty was wild meats. All who remember Gibney's remember the pheasant and squab and wild fowl that hung our front along with the venison. They also remember the lines of Cadillacs that used to park and double park near the store and the parades of be-furred and be-jewelled patrons going in and out the door.

Especially during the 1920s, there was a tremendous flush of wealth in Saranac Lake due in part to the number of moneyed patients curing in the village and also due to intense activity at the "camps" of the very rich around the Saranac and St. Regis Lakes. It is almost satire that one of the most ostentatious displays of this wealth could be seen consistently at a butcher shop.

In December, 1921, the Gibneys bought, from the Miller Estate, the building in which their business had begun to flourish. Because of the LaTours' political influence, the Gibneys were able to make their building more prominent in a unique way. They put a new front on 52 Main Street that was actually an extension of the structure forward. It brought their storefront eight feet closer to the street line than that of their neighbors to the north in the Donaldson Block. The ploy didn't remain unique for long. Sagendorf quickly followed suit. When the Tousley (1924) and Gray (1925) buildings were erected, they were built to the new alignment of the Second Empire fronts. It is not known when the move forward occurred at the Miller Store building; but, today, all the structures north of 34 and south of 56 Main Street are considerably closer to the curb than others on the west side of the street.

Will Gibney loved horses — particularly racehorses. In fact, he owned a couple; but, like Will himself, they were perhaps a bit too relaxed. While Nellie was running the store and making the profits (and making frequent trips in her own Cadillac to party at the Meridian, a speakeasy on the Canadian border), Will was in Saratoga running his horse and losing the profits. When the effects of this pattern combined with those of the Great Depression, the outcome was inevitable. Gibney’s Market, Inc. went bankrupt and the Miller Estate foreclosed on the property, taking the building and immediately reselling it to Arthur O. Buck and William T. Lins in April, 1936, for $14,533.

The evil and deviltry that men do live after them. Pete Higgins, longtime sportsman... always good copy as the saying goes in newspaper circles... dating from the good times of the village, was reminiscing and tossing out bits of bait for the local gentry to test their memories and whatnot.

Pete harked back to the Gibney Market era. The Gibney Market was a great place for hanging up the spoils of the chase and if there was an albino deer, a black snowshoe rabbit or an off course elk brought down, it was certain to hang in front of Billy Gibney's market some where in the area where the Federal Savings and Loan stands.

Pete, who has a memory like the fabled elephant claims that Bill Wallace, erstwhile chief of police, once shot a swan in a case of mistaken identity and that the conservation men claimed it and fined poor Bill. Later they returned the fine.

I don't know how many low flying swans come over here but he is no more to blame than the man who shot the Chateaugay Moose in the belief that it was a large deer.

Pete brought up another instance. A sixteen year old boy shot a 360 pound "deer" which was hung at Gibney's Market and which was immediately confiscated by the Conservation Department and identified as an elk.

This memorable trophy had to have been bagged somewhere between 1925 and 1930 judging from Pete's age. At this point Harold McCasland entered the conversation and said that he had taken some electrician's pliers and pulled all the elk's teeth which he gave away as souvenirs. He said he gave one to Roy Witherbee.

The Gibney Market was decorated with stuffed animals and looked a lot like a taxidermy shop. There was a wide ledge about 4 feet from the ceiling and mounted birds, deer, and other specimens of Adirondack animal life lurked there in natural poses giving an offbeat but interesting atmosphere to the popular market.

Pete in the inventor of the famous Higgins Spoon which is usually identified with prize Adirondack catches in the Wehle Fishing Contest. We will have a feature on another of his specialties very shortly.