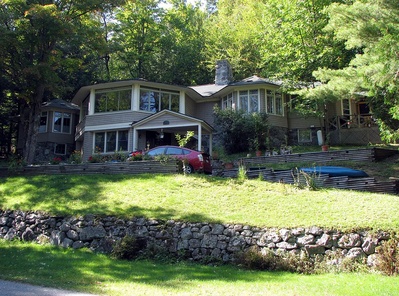 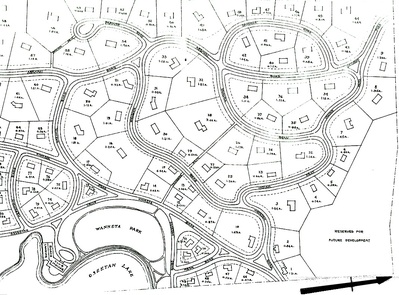 "Plan for subdivision" for Glenwood, undated. "Indian Pass" and "Abenaki Road" and Wayotah Road became Glenwood Drive, leaving "Tahoma Road" as one of the last "Indian" names in the development.
Courtesy of Mary Hotaling. The last of Saranac Lake's three upper class neighborhoods, after Highland Park and Rockledge, the Glenwood Estates Colony was developed more quickly. It was established just one year later than Rockledge, in 1911, by a local partnership of Dr. Lawrason Brown, banker William Minshull, and merchant William C. Leonard on 120 acres of Dewey Mountain's lower slopes above Riverside Drive. Like Highland Park, the lots in Glenwood had explicit deed restrictions to protect property values and attract the wealthiest buyers; the regulations were the most restrictive in the village and included regulations that the dwelling house must cost at least $5,000 and could stand no closer than 25 feet from the property lines. Of the twenty-six buildings within the area, about eighteen were built in the curing era, most by 1930. Residents and tenants included members of the Wrigley and Edison families, Dr. Francis B. Trudeau, Dr. John N. Hayes, architect William G. Distin, Sr., and a vacationing Albert Einstein.

A 1928 map uses fanciful native American names for all of the roads of the area, only a few of which are still in use.