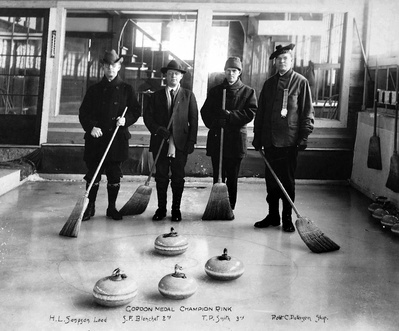 Gordon Medal Champion Rink; H. L. Sampson, lead; S. F. Blanchet, 2nd; T. P. Smith, 3rd; Robert C. Paterson, Skip. Courtesy of Sarah Blanchet The Gordon Medal was actually two different curling medals created by Robert Gordon of New York City. In 1869 he created the Championship Rink Medal to be awarded to the champion of the American Grand National Curling Club, and, in 1884, he created a gold medal to be awarded to the winner of an annual competition between the curlers of the United States and Canada;

Special to The Now York Times. SCHENECTADY, N. Y., Jan. 31.—The Saranac Curlers won the Gordon medal match here tonight, defeating the Mohawks of this city by the score of 20 to 8 in a game which was snappy and marked by brilliant plays.

The Caledonian Curlers of New York, playing for the Gordon medal on the rinks of the Mohawk Golf Club this morning, defeated St. Andrew's Rink of New York, 16 to 13. Both rinks in the sixteenth end tied 13 to 13, and in the seventeenth the Caledonians nosed out St. Andrew's. In the afternoon contest the Saranacs won from the Caledonians by the score of 19 to 8 in a one-sided game, which was slow and uninteresting. The Ice was fast and in excellent condition…

The Saranac Lake Curling Club have had a very successful season so far this year and have already won the Gordon Medal at Schenectady, and the Allen Medal at Utica. They have also retained the possession of the Dr. Robert C. Paterson Cup in Saranac.

The annual meeting and election of officers of the Saranac Lake curling club was held at the clubhouse Friday evening:. Reports of the various committees were read, and the general good feeling and success of the club discussed.

It was the unanimous opinion of the members that the club has just closed one of its most successful seasons. During the year, its teams won the Gordon national medal, contested for at Utica; and the Patterson Memorial medal, which was played at the local rinks.   Plans for next year are already being made, with the objective being the international competition, which will be held in Montreal. The 1924 tournament for the Munroe cup, decided by weekly eliminations was captured by the team skipped by   N. S. Davenport, besides whom there were Dr. C. A. McAfee, John R. Hogan and Eugene Delamater.

Curling to be Demonstrated at 1932 Olympic Games

Saranac Lake — Devotes of the Scotchman's game of curling— to be a demonstration of the III Olympic Winter Games of 1932-— now have a new rendezvous in the Adirondack Mountains through the construction of a luxurious new club house by the Saranac Lake Curling Club.

Built especially to afford the finest indoor conditions for curling, the building is 173 feet long and contains four curling rinks. . Great reflectors with 200 watt bulbs cast a shadowless and ample light over the entire area, while atmospheric conditions and accoustic properties have been worked out on the most modern lines. A boardwalk encircles the entire interior of the building, thus affording spectators a full opportunity to study each detail of the interesting contests held there nightly. A large reception room runs across the entire front of the building, with a partition of plate glass facing the rink, permitting a clear view of all games in progress from an angle of warmth and comfort.

The Saranac Lake Curling Club sends teams each winter to compete in Schenectady, Utica, the Brookline Country Club and the International Gordon Medal Competition in Montreal. Its season ends annually with the Patterson Memorial Medal Match on its own rinks here.

Preparations for the Gordon medal matches are in progress by the Saranac Lake Curling Club. These international matches are to be held in the resort village on February 5 and 6, and will be participated in by curling clubs of both the United States and Canada. This will be the first time the matches have ever been held at Saranac Lake.

MONTREAL, Jan. 14 (Canadian Press) .—The Gordon international medal, first competed for in 1884, returned today to the United States after a year's stay in Canada. The visitors, led by John Anderson, Grand National Curling Club president, triumphed by 228—145 over rinks representing the Canadian branch of the Royal Caledonia Curling Club.

Victory for the United States players was one of the most decisive  in  years.    Of  the sixteen matches played, they won eleven, Canada four, and the other ended in a draw. It was the thirteenth time United States won the medal, which Canada has held thirty times.

The Utica Curlers retained the Munson Shield by defeating Heather of Montreal, 43—41, in their annual match.

The New Yorkers won two of the four games, lost one and drew the other. Most credit for Utica's victory went to the rink skipped by A. J. Johnson, which gained a 15-7 decision over the four headed by A. McK. Baile.

Head 16 U. S. Teams as International Gordon Medal Is Won

Sixteen United States Curling teams have recaptured the coveted International Gordon Medal. The American Curlers decisively defeated the Canadian Branch of the Royal Caledonian Curling and Montreal district rinks, 237 to 145. The United States teams were paced by the Country Club of Brookline, Massachusetts, and the Utica C. C. of New York, each winning three games.

No medal was awarded the team with the highest plus average, but in this title division, R. B, Leonard's team from Saranac Lake won the Mythical championship. The Saranac Curlers beat F. Marlers Pointe Claire forces, 13 3.

UTICA, NY. (AP)—The United States again holds the Gordon Invitational Curling Medal, a trophy that has been in competition since 1884.

The American team held on to a lead built up in opening matches Friday and scored a 392-387 victory over Canada in the annual competition between the two nations. U.S. entries had a 31- point lead at the end of Saturday's competition.