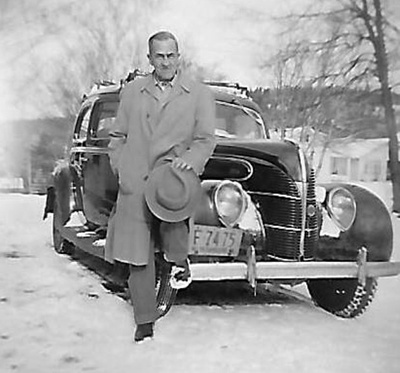 Gordon Vosburgh was justice of the peace for the Town of Harrietstown for thirteen years.  He was a World War I veteran who served in the US Army Medical Corp.

Justice of the Peace In Harrietstown

Gordon Vosburgh, 67, justice of the peace for the Town of Harrietstown since 1949, died Friday morning at his home at 26 Prospect Street. Judge Vosburgh also was deputy police judge for the Village of Saranac Lake. He was born in Saranac Lake on Aug. 26, 1898, a son of Jason and Hattie Dukett Vosburgh.

Judge Vosburgh was a corporal in the Army in World War I and was active in veterans affairs, serving as both commander of the local American Legion Post and the Franklin County Post. He also was interested in youth work and helped organize junior basketball and the Matty League in Saranac Lake and was manager of the American Legion basketball team. He was a member of the Saranac Lake Fire Department.

After undergoing surgery for cancer in 1950, he became interested in the work of the American Cancer Society and served as chairman of the local unit's crusade in 1954.

He and Mrs. Vosburgh, the former Elsie Ebare, of Altona, celebrated their 41st wedding anniversary on April 18. They were married in Saranac Lake in 1921.

An American Legion service was held at the Fortune Funeral Home on Sunday evening and a funeral service was held at 2 p.m. this afternoon Dr. Lionel R. Driscoll, pastor of the Methodist Church officiated. Interment will be in the Vosburgh Cemetery in Coreys in May.