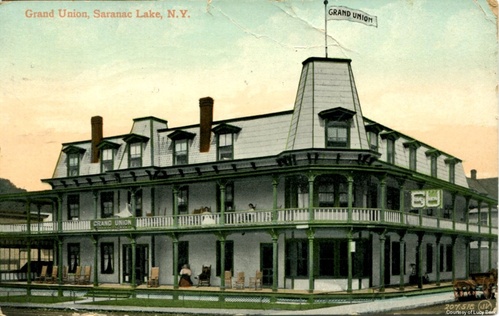 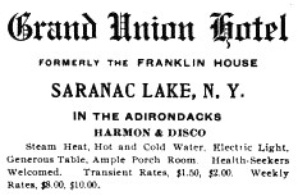 Ad for the Grand Union in the February, 1908 Journal of the Outdoor Life 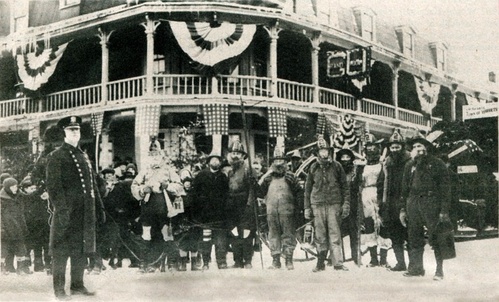 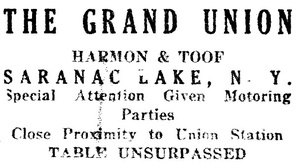 In 1907 The New Franklin House at Bloomingdale Avenue and Depot Street was sold by Michael Morgan & Son to Harmon & Disco, proprietors of the Central Hotel in Broadway for $23,000.1

The Grand Union Hotel, previously the Franklin House was at Bloomingdale Avenue and Depot Street. The manager was John Harmon. 2 It burned to the ground in 1926.

From the Adirondack Daily Enterprise, December 11, 1993

Saranac Lake hotels and the House of Morgan 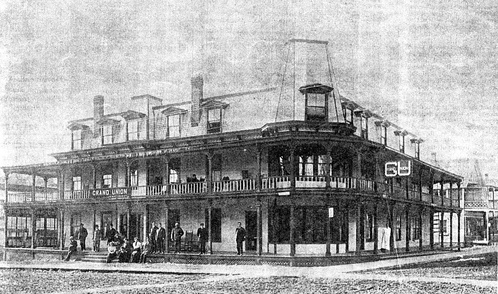 Adirondack Daily Enterprise, December 11, 1993In the succession of years overlapping the turn of the century, while our village was experiencing a period of rapid growth, Saranac Lake's hotels were enjoying an era of prosperity. While being closely related to the health industry, there were other factors contributing to the general attractiveness of the area which directly benefited the hostelry business. Camping, hunting, and fishing brought many sportsmen to the region. Artists and writers found inspiration, but also many more came to simply enjoy the peace and quiet that the surrounding forest and lake environment offered. In any event, temporary housing was a necessity. 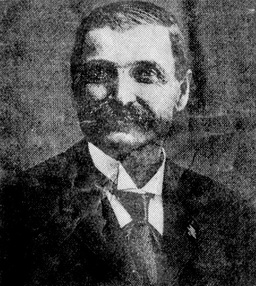 Michael Morgan
Adirondack Daily Enterprise, December 11, 1993 One of the early hotels that surfaced to furnish accommodations within the village limits was the Franklin House, which was erected on the corner of Depot Street and Bloomingdale Avenue, where the Stewart's Shop is presently located. This site was obviously selected for its proximity to the railroad station, making it so convenient for the incoming tourist. Not only was the place within walking distance but it was also the very first hotel to be seen by those stepping down from the train.

Michael Morgan was quick to recognize the potential of this advantageous location and together with his brother-in-law, James Mannix, erected the hotel that became the Franklin House. The place was an immediate success, not only because of the providential site, but rather by the popularity of the genial proprietor who managed the hotel in a homelike atmosphere while offering an exceptionally good table. It soon developed into one of the finest hostelries, not only in Saranac Lake but throughout the entire north country.

Michael Morgan was born in Peru, N.Y. on April 7, 1843 and continued to live there until the outbreak of the Civil War. He enlisted in the Union Army to serve under his country's flag, like so many other young men from the Adirondacks. After returning to Peru at the end of hostilities, he married Mary Mannix at St Patrick's Catholic Church in Keeseville on Oct. 11, 1868. During the 1870s Morgan became involved in the lumber industry at Goldsmith, a sawmill settlement on the north branch of the Saranac River, between Loon Lake and Clayburg, Like so many other Adirondack ghost towns Goldsmith has long since vanished from the local scene.

During 1888 Morgan moved his family to Saranac Lake, a relocation that proved to be most beneficial for the 45-year-old tyro searching for a better living. Possessing all of those attributes necessary he was ideally suited to the role of boniface in a public house, gifted with a pleasant demeanor and a capability to manage. As mentioned earlier he had joined with his brother-in-law in the venture but as the years passed his son, John, bought out the interests of his uncle, Mannix, and the father-son team jointly operated the hotel for several years. Their advertisement appearing in the "Adirondack Directory" for the year 1906 read as follows:

The management takes particular pride in the cuisine, which is supplied with game and fish in season, and fresh milk, eggs and vegetables in abundance.

The culinary department is presided over by a competent chef, and, together with the table service, cannot fail to commend this house to the most fashioned. 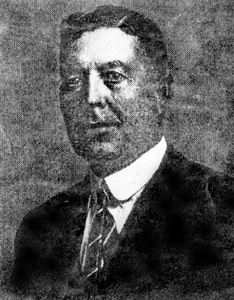 The son, John C. Morgan, was born in Peru on Aug. 2, 1869, and moved to Saranac Lake with the family some 19 years later. Like his father he readily fit the mold of hotel management and quickly became both popular and influential among the village residents. Becoming interested in community affairs, he served as chief of the fire department for many years and acted on several municipal committees. Taking an added interest in politics, he was elected to the office of village president on the Democratic ticket. When the Elks Lodge No. 1508 was formed in 1925, Morgan became the first exalted ruler.

Much earlier, on June 2, 1897, he had married Alice English here in Saranac Lake, a union that fostered a hotel connection which would endure for many years to come. In 1907 the Morgans sold the Franklin House and the new owners changed the name to the Grand Union. Under that banner the hotel continued to operate until 1926 when, unfortunately, it burned. After retirement the father purchased a house at 28 Bloomingdale Avenue where he lived with his wife and youngest daughter but John chose to make another bid in the hotel business.

Returning to Morgan and Son, both were village leaders highly respected throughout their life-times as unselfish members of the community and were sadly missed after their passing at separate times. Michael died on March 18, 1923, after 35 years in residence among friends and relatives. Only four years later, on July 23, 1927, John lost his life, drowning in an accident while canoeing on Long Pond near Floodwood. So ended the lives of two prominent hoteliers who represented the best of the industry during those hectic years of resort hostelry in Saranac Lake.

Michael did not live to see his former hotel burn, as he died three years before the Grand Union was consumed in flames. John's untimely death also occurred prior to the conflagration which reduced the St. Regis to a pile of rubble. If the fates decreed that both beloved buildings had to go down in flames, those same fates decided that the former owners would not have to stand around and watch.