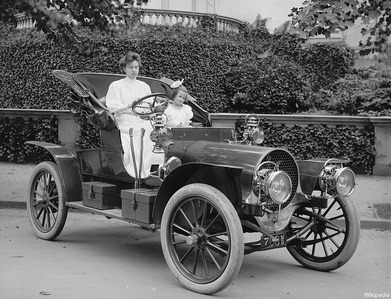 1907 Franklin Model D Roadster. See A. Douglas Bombard for a local example of this car. Elbert E. Bellows operated the Gray-Bellows Motor Company in partnership with Lee Gray at 124 Main Street from the 1910s through at least 1948.

From the 1917 Mountain Home Telephone directory.  Courtesy of Betsy Minehan.They sold Franklin motor cars that were manufactured in Syracuse.

On May 14, 2011, in his column in the Adirondack Daily Enterprise, Howard Riley quoted an undated (but apparently c. 1914) booklet titled "The Adirondack Motor Guide": "The Gray-Bellows Garage at 122-126 Main St. (the NAPA Store today) was the dealer for Hudson and Franklin Motor Cars and Fisk and Republic Tires and advertising 'expert service on Delco starting and 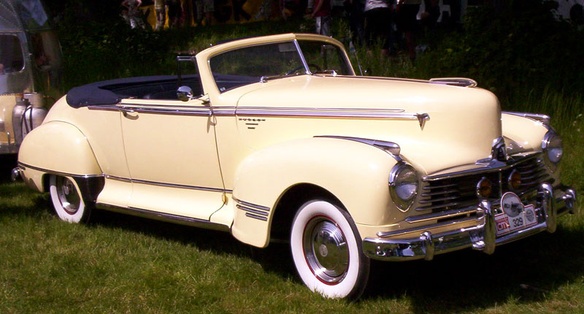 Saranac Lake, N. Y.—Gray's Garage has now become the Gray-Bellows Motor Co., Inc., owing to the association of Elbert E. Bellows with Mr. Gray in the business. They have a concrete and steel building with two floors 44x60 feet in size at 122-126 Main street. The machine shop is located on the lower floor, which is below the street level but has large windows on three sides. On the main floor is located the office, stock room and electric charging station. About 30 cars can be accommodated, and Franklin and Hudson cars are sold. We were misinformed two weeks ago that Mr. Bellows was opening a business in New York City, where he was only visiting.

It is little more than 25 years ago that John Wilkinson built his first automobile driven by an air-cooled engine and a few years later that the H. H. Franklin Mfg. Company undertook the manufacture of the car designed by Mr. Wilkinson. At the present time there are 45,000 Franklin owners and the Franklin car is known wherever automobiles are used.

The Franklin Company have held to the same fundamental principles of design incorporated in the first air-cooled car and today John Wilkinson and H. H. Franklin are among the foremost figures in the automobile industry of America.

Among the eight oldest dealers in the Franklin Sales organization are Gray-Bellows Motor Company of Saranac Lake, they having been identified with the distribution of Franklin cars for upwards of eighteen years. The Saranac Lake territory includes Lake Placid and Tupper Lake. It also includes Malone, where a service station is maintained, and several towns in that vicinity.

The Gray-Bellows Company have not only furnished adequate and satisfactory service to their car owners, but have made steady progress in the business of selling Franklin cars. During the past few years they have consistently exceeded their quota of sales, as established by the factory.

In addition to selling Franklin cars the Gray-Bellows Company for some years past have held the franchise in this territory for White Motor trucks and buses, and their service station on upper Main street of Saranac Lake is the headquarters of the Adirondack Motor Bus Co., Inc., which renders a bus service between Saranac Lake and Plattsbuigh.