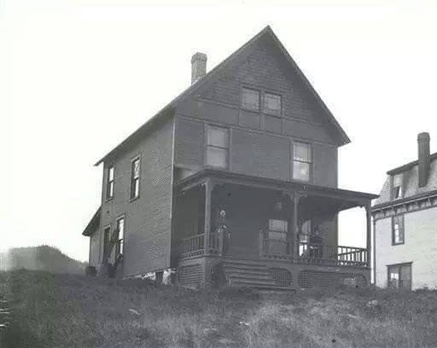 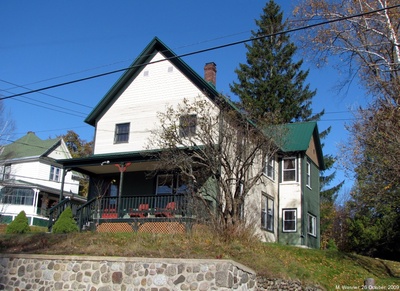 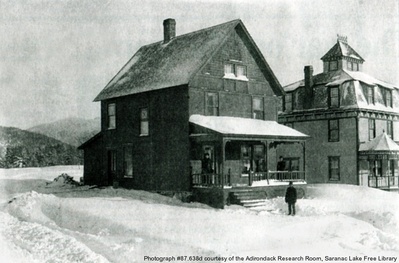 The simple Gray Homestead and the more elaborate house next door are shown in early days, when Helen Hill was largely undeveloped. The snowdrift on the left is today's Helen Street. Phil Gallos wrote in Cure Cottages of Saranac Lake that until May 1892, all of the hill was a sheep pasture, cleared of trees and ready to build on. Lake Placid attorney Frederick A. Isham saw opportunity in the community that had just established the first incorporated village government in the Adirondacks. He bought land and hired surveyor George T. Chellis to lay out the first large, residential subdivision in Saranac Lake. Phebe Washer Gray bought one of the largest of Isham's Villa Sites, one-fifth of an acre, in September 1892 for $300. The widowed Mrs. Gray soon built what was likely the first house on Helen Hill, numbered 18 Front St. (now No. 40). The elaborately detailed house with the Mansard roof next-door was 20 Front Street. A map from about 1911 [see Helen Hill, at bottom] shows the owner's name as Leonard. Later called Clear View Cottage and then Garwood Terrace, it was operated as a cure cottage for ambulant patients in the 1920s; today the site is vacant. Adirondack Daily Enterprise, December 1, 2012Address: 40 Helen Street