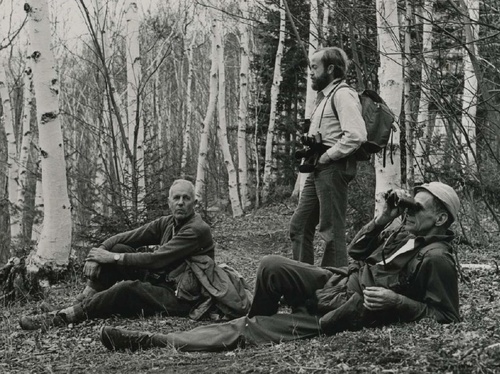 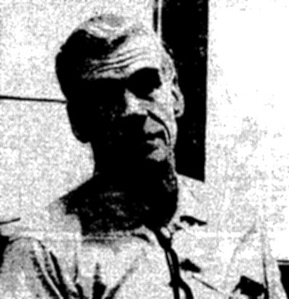 Died: July 4, 1995, while hiking along a trail at High Falls in the town of Saranac

Greenleaf Tucker Chase, a respected Adirondack naturalist known as "Greenie", lived in the Charles Greenough Cottage near Ampersand Bay on Lower Saranac Lake with his wife, Creta, a well-known artist and craftswoman. When he died childless and a widower, Greenie left his property to The Nature Conservancy, which sold it.

SARANAC — Respected Adirondack naturalist Greenleaf Tucker Chase, known as "Greenie," died while hiking on one of his favorite trails Tuesday.

"He was in his element," hiking partner Barbara Parnass said.

Chase, 83, of Saranac Lake had brought Parnass hiking Tuesday along a trail at High Falls in the town of Saranac, a popular hiking and picnic area on the Saranac River. He collapsed suddenly on the trail, at about 3:30 p.m., state police said.

"It was just so quick, I don't think he knew what happened," Parnass said.

Town of Saranac fire and rescue crews hiked to the spot, tried to resuscitate Chase and carried him a half mile to the High Falls Road.

Friends said Chase had been an avid hiker since his youth, and he wanted to show Parnass his favorite spot.

His increasing emphysema made him aware of his limitations, but he jumped at every opportunity to go in the woods that he could, according to Parnass.

Chase and Parnass, who also lives in Saranac Lake, had a special fondness for rare plants and wild orchids, she said. "That's how I first got to know him," Parnass said.

"I guess his biggest characteristic was his enormous interest in whatever was going on in the outdoors," Parnass said. "Greenie had a wonderful way of exciting your interest in these things without lecturing."

Chase was one of the preeminent and most sought-after Adirondack conservationists, said Neil Woodworth of the Adirondack Mountain Club.

"His was a career of achievements for the Adirondack Park and its natural resources that has not been exceeded by anyone. It was a remarkable career that continued right to the time of his death," Woodworth said.

In the 1950s, Chase was instrumental in founding the Conservation Camp for boys, then located at the present site of the Department of Environmental Conservation offices in Ray Brook.

The camp was the forerunner of the DEC Environmental Education Camp on Lake Colby.

A landscape horticulturalist by profession, Chase began his career with the state in the late 1940s at the Delmar Game Farm.

He came to the Adirondacks when he was named the DEC's first Adirondack wildlife manager. In the early 1970s, Chase left the DEC to become the first wildlife biologist for the Adirondack Park Agency (APA). He served two years with the APA before retiring.

Chase had also served as a consultant on environmental issues to organizations such as the Nature Conservancy.

Funeral arrangements are in the care of the Fortune-Keough Funeral Home in Saranac Lake and were incomplete as of press time today.

SARANAC LAKE — Greenleaf T. "Greenie" Chase, 83, of Saranac Lake, died Tues., July 4, 1995 while hiking along a trail at High Falls in the town of Saranac.

Mr. Chase was raised in Massachusetts and New Jersey. He graduated from the University of Massachusetts in 1934 with a degree in landscape horticulture. He began his career with the state in the 1940s working in what was then the Conservation Department in the Bureau of Game at Delmar Wildlife Resource Center. One of his first jobs was at Bear Spring Mountain. Chase left the Conservation Department and served in the Army Medical Corps from 1943 to 1946, serving in France during World War II.

In June 1946, he was appointed district game manager for the Adirondacks. His first office at that time was located over Rice's Furniture Store in Saranac Lake. His office was later moved to the Harrietstown Hall and then to a log cabin in Ray Brook on the site currently occupied by the state police offices. He left the Conservation Department in 1971 to work as a wildlife biologist for the Adirondack Park Agency (APA) until his retirement in 1974. Chase had also served as a consultant on environmental issues to organizations such as the Nature Conservancy. In the 1950s, he was instrumental in founding the Conservation Camp for boys, then located at the present site of the Department of Environmental Conservation (DEC) offices in Ray Brook. The camp was the forerunner of the DEC Environmental Education Camp on Lake Colby. Mr. Chase was awarded the Oak Leaf from the Adirondack Nature Conservancy, which is its highest honor.

Survivors include one sister, Phyllis Braun of New York City; one brother, William Chase of Park Forest, Ill.; and several nieces, nephews, and cousins. He was predeceased by one brother, Charles Chase.

Funeral arrangements are in care of the Fortune-Keough Funeral Home. There will be no calling hours. Interment services will take place at the convenience of the family. Memorial contributions may be made to the charity of one's choice in care of the funeral home.