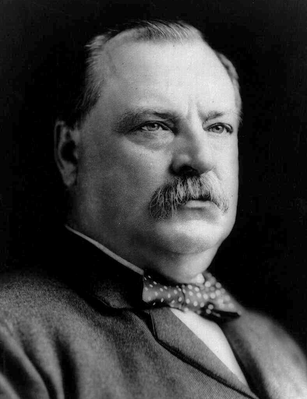 Under the title of "An Adirondacker," the Adirondack Enterprise has the following: "Twenty years ago Grover Cleveland was a frequent visitor to the woods of the Adirondacks. 'Uncle Mart' Moody, of Big Tupper Lake catered to his simple wants; he spent much time at Paul Smith's and with 'Uncle Paul' Smith drove many miles through the mountains. Cameron's at Ray Brook, was prominent then among the resorts and Cleveland stopped there occasionally. Lake Placid was just beginning to attract attention and Cleveland was a familiar figure in the hotels of this resort, but it was at Saranac Inn that he remained for the longest periods. It was here that Cleveland passed his honeymoon; it was here that the committee of America's foremost Democrats of the day assembled and told him that be had been nominated on the Democratic ticket to the highest office within the gift of the people of the United States. It would seem therefore that some of Cleveland's happiest, proudest and pleasantest moments were spent among the lakes, woods and mountains of the Saranac country. To the people of the woods with whom he came in contact during this period Cleveland and his companions, Lamont, were delightful chums. It was a pleasure to fish with them and to hunt with them. It follows that there are many anecdotes of Cleveland's visit. It was fitting that on Friday, the day of the funeral of the great man, some simple thing be done by those in the Adirondacks who knew and honored him. Cleveland's cabin at Saranac Inn is today an important and well preserved part of the lodge of Thomas Blagden. About the structure that Mr. and Mrs. Cleveland occupied have been built some other rooms for the comfort and convenience of Mr. Blagden and his friends and now all combine in an interesting type of rustic architecture. Many of the furnishings of the Cleveland cabin are as well preserved as the cabin itself, but chief among them is a handsome flag. This, Mr. Cleveland's flag, was raised at half mast on Friday." 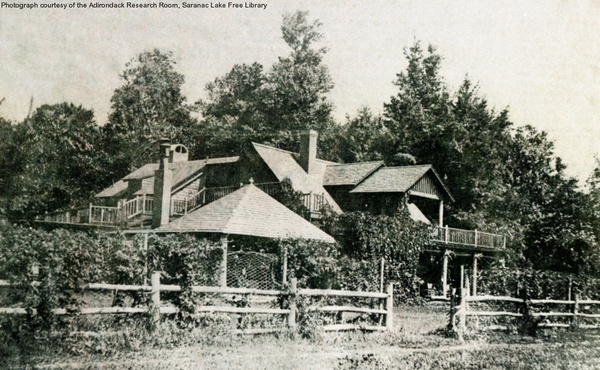 The President's Honeymoon Cottage at Saranac Inn THE PRESIDENT’S OUTING

He is Now Rusticating in the Adirondacks.

President Cleveland left Washington last Monday morning at 9:40 o'clock for his summer vacation in the Adirondacks. He was accompanied by Mrs. Cleveland and Mrs. Folsom, Mr. and Mrs. Lamont going as far as Albany. The party occupied a special car tendered by the directors of the Delaware and Hudson Canal company. At Albany the party was joined by Dr. Samuel B. Ward. They left that city at 9:13 P. M., Monday, and passed through Plattsburgh in their special car attached to the sleeper Tuesday morning, their route being by Rouses Point, over the O. & L. C. to Moira, and after passing over the Northern Adirondack road to Paul Smith's station, they were driven to the Prospect House, where they arrived at 4:30 in the afternoon. The road was deep with mud and the carriage ride of sixteen miles somewhat tiresome. They now occupy a cottage near the hotel.

Their special car ran through from Washington to the station at Paul Smith's. No mail will be forwarded to Mr. Cleveland or opened by him during his absence. Any public business requiring his immediate attention will be brought to his attention by the cabinet officers.

The reporters of the city press state that the President has given notice that he wishes to be free from “newspaper impertinence” during his outing. He will carry a shot-gun, will not be interviewed, and says that any news relating to his trip will be furnished to the regular press agencies by him. Mr. Cleveland's idea of a vacation is a perfect absence of all official care, the privilege of appearing without the usual restraint imposed by reason of his office, a chance to dress as the comfort of the season would suggest, or as any one does who goes for a month's visiting in the Adirondacks. His wardrobe this year, as last, will consist principally of dark blue shirts and trousers, a broad-brimmed felt hat, his fishing tackle, and a trunk filled with the proper apparel which he expects to don at some of the informal evening receptions Mrs. Cleveland is to hold in her mountain retreat. Mrs. Cleveland will show her independence by taking only the most necessary garments for roughing it in her daily jaunts. As she is to be accompanied by her maid, Mrs. Cleveland expects to find her useful in helping her to learn the art of being home away from civilization. The party expects to be in Washington again September 16.

The party occupy a log cottage near the hotel, owned by W. R. Dutton, of Philadelphia. It is fitted with that rare taste which distinguishes many of these lodges in the wilderness. On the ground floor are a sitting-room and bed-room. Log and bark work predominate in decoration. Rare old pieces of furniture collected by Mr. Dutton ornament the sitting-room. It is rendered cheery by a log fire burning in an open fire place. The doors are of unpainted pine with buttons instead of knobs and the bedsteads are made of pine and bark. They were constructed by guides during the long winters. The second floor consists of one large room. The outlook from the cottage is charming. The Upper Saranac Lake, with its island-dotted surface and ragged shores, lies just before the house, and beyond there is a mountain wall. Here the President can obtain perfect rest. It is his custom to mix unostentatiously with all the guests at the hotel. There are no introductions and no distinctions. The President drops in a group like one familiar with the place, and any one talks to him who desires to do so. The term “Mr. President” is severely dropped and plain “Mr. Cleveland” substituted.