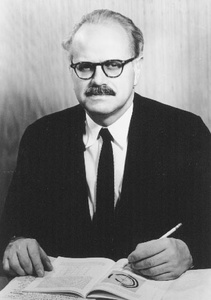 Dr. Gustav J. Martin was a patient in Saranac Lake. He was a noted scientific researcher who went on to work at Johns Hopkins. In 1936 he wrote a paper with Fred H. Heise and Leroy U. Gardner investigating vitamin C therapy for tuberculosis.

Philadelphia, Pa.—Mr. A. B. Collins, President of The National Drug Company, announced today that Dr. Gustav J. Martin had been appointed to the position of Research Director of the company. Dr. Martin comes to The National Drug Company from the Warner Institute in New York City where he was Assistant Director in charge of the Division of Chemistry. He is a member of numerous scientific societies and has published more than 50 papers in various scientific journals. The appointment of Dr. Martin is another step toward the fulfillment of the broad research program which National Drug is now undertaking.