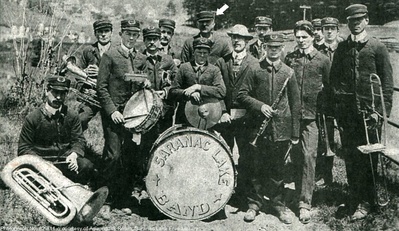 H. Ford Towner is in the center of the back row (arrow). Probably on Decoration Day c. 1910, the men of the Saranac Lake Band posed at Pine Ridge Cemetery, in uniform jackets decorated with braid, for a photo by Kollecker & Co. In 1980, George Ford Towner identified his father and some other members of the band. Seated at left: Nelson Trombley (bass tuba). First row, from left: Roy Lobdell (snare drum); Earl Lobdell (bass drum); 2 others unknown. Second row (L to R): Phillip L. Steneri (baritone), 4 others unknown. Third row (L to R): Archie Nimmo (leader and No. 1 cornet). Pop Duso (cornet), H. Ford Towner (trombone), one other unknown. In 1970 Towner also wrote that several of these men from the Saranac Lake Business Men's Band, which he said had been in existence for many years, taught members of the Saranac Lake Boys Band. Nimmo taught the trumpets, Towner the trombones, the Lobdell brothers the drums, and Mr. Trombley the basses. Adirondack Daily Enterprise, May 28, 2011 Born: 1881

Hamilton Ford Towner come to Saranac Lake to work at Sherrill's Grocery. He later managed the A & P when it was located in the Spaulding Block. He was a director of the Saranac Lake Band. In 1948, he served as Recording Secretary to the Odd Fellows, and in 1954 he served as their District Deputy Grand Master.

He is buried in Harrietstown Cemetery.

The marriage of H. Ford Towner, of Saranac Lake, and Miss Madge Hutchins, daughter of Mr. and Mrs. Hollie Hutchins, of Constable, was solemnized at the home of the bride Christmas day. The ceremony was attended only by relatives and near friends of the young couple. The bride is one of Constable's favorite daughters and the groom is one of Saranac Lake's more estimable young citizens, director of Towner's Orchestra, and a valuable member of the corps of C. L. Sherrill. The young couple have a large and ever increasing circle of friends who wish for them a happy wedded life. Mr. and Mrs. Towner will reside in Saranac Lake.—Adirondack Enterprise.