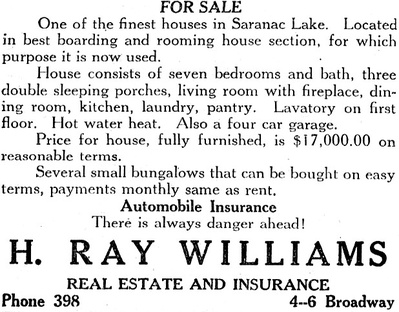 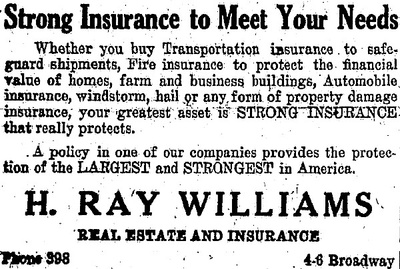 Louis Kernochan, H. Ray Williams and W. A. Lawrence, of Saranac Lake, have been appointed by the town board of Harrietstown as a commission to determine the places within the town where liquors may be sold the coming year beginning October 1. The number of saloon and hotel licenses will be cut from 15 to 9 under the new excise law. The commission will investigate and determine what applications for license shall be granted and what refused.

Former Town Clerk of Saranac Lake Released on Bail Following Charge of Failing To Make Financial Returns of Payments Made.

Bail of $1,500 on one charge of grand larceny and $1,000 on another was fixed Saturday by County Judge John M. Cantwell in the case of H. Ray Williams of Saranac Lake, prominent real estate dealer and former welfare officer and town clerk of Harrietstown.

Mr. Williams was arrested Friday at his home in Park Place, Saranac Lake, by Police Chief John Tierney on a warrant issued by Justice George A. Utting following a conference with District Attorney Harold W. Main. He was brought to the Franklin County jail.

The charges of grand larceny are based on alleged misappropriation of $3,500 in real estate mortgage transactions. The complaints were made by Mrs. James Moody, 103 River street, Saranac Lake.

The first charges that prior to 1927 she invested $2,000 in a mortgage through Mr. Williams and that he had failed to return to her any payments on the principal while W. R. Eaton of Broadway, whose property was mortgaged had paid Williams $1,500 of that amount.

The second complaint states Williams has not returned to Mrs. Moody any part of the $1,500 principal she invested in a mortgage on property owned by Charles Brown of Van Buren Street. Brown, it is stated, had repaid the entire $1,500 and interest by 1927.

In each case Mrs. Moody said Mr. Williams paid her only the interest and that even these payments ceased a year ago. Meanwhile, it is charged, Williams told Mrs. Moody that Brown and Eaton intended to make their payments in lump sums.

Mr. Williams has been a prominent figure in Saranac Lake for more than 25 years. He has been Republican county committeeman, a trustee of the Methodist Episcopal church and a member of the Masonic lodge. He was a candidate for Harrietstown supervisor at the last election.

H. Ray Williams, Saranac Lake, who was before the court on two indictments charging grand larceny in the first degree, was, by consent of the and the district attorney, permitted to plead guilty to grand larceny in the second degree and such plea was entered by him. The second indictment was dismissed and sentence was imposed on the plea of guilty to the charge contained in the first indictment. He was sentenced to not less than one year and six months or more than two years and six months in Clinton prison at Dannemora.

Mr. Williams, who has for years been a well known real estate and insurance man in Saranac Lake was arrested in last July following complaint made by Mrs. James Moody, Saranac Lake that Williams had retained for his own use money that was due her in payment of a mortgage which Williams had placed for her on real estate in a business transaction; that the money on the mortgages had been actually paid to Williams by the mortgagor and that Williams had kept the money and had failed to return to her any payments on the principal. Out of the complaints by Mrs. Moody the two indictments were returned against Williams by the grand jury. The total amount involved in the case under the two indictments was $3,500. As above stated the sentence was imposed only on one indictment, the other being dismissed.

Last Saturday evening a terrible tragedy occurred at Saranac Lake, causing the death of Gordon Williams, a young business man of that village, and probably the fatal injury of his brother, Ray Williams. A live electric wire was the cause of the accident, which occurred at about 7:30 in the evening, at the business establishment of Williams &. Sons. At that time Ray Williams, a member of the firm, went into the basement of the store to get some meat for a customer. A few minutes later his shrieks were heard by those above, and his brother Gordon rushed down stairs to find Ray grasping the electric wire and struggling in agony to release himself. Ray sprang to his brother's assistance, and seizing him was himself paralyzed by the deadly current and unable to loose his hold on his brother. Their cries brought Bert Munn and Will Johnson, who each in trying to pull the other men away, were also clutched by the same fearful and irresistable power, and there the four men struggled and cried in agony attached to each other, and to the deadly wire by a force from which they could not break away. Mr. J. H. Williams, the father, by this time had reached the scene, and by almost superhuman exertion, succeeded in separating the last three men except his son, Gordon, who was transfixed to the wire, and remained in his agony until the current was finally turned off. It was then too late. He had been electrocuted and died almost instantly after he was released.

This fatality has caused universal sorrow and mourning at Saranac Lake where the young man who met his death was highly respected. It is now hoped that Ray Williams will recover, although his condition is critical.