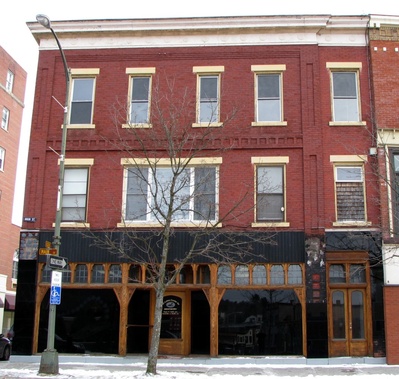 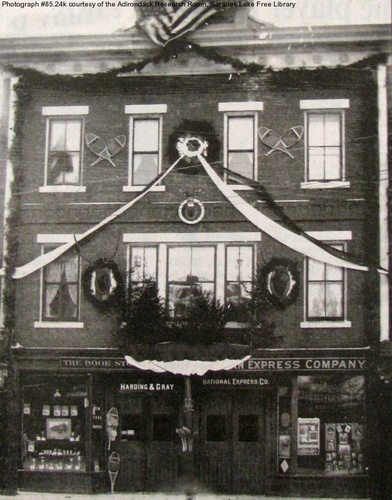 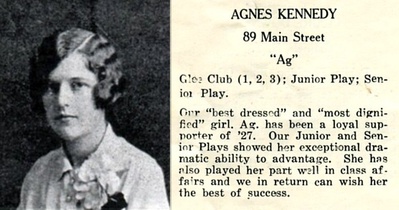 Agnes Kennedy in the 1927 Canaras 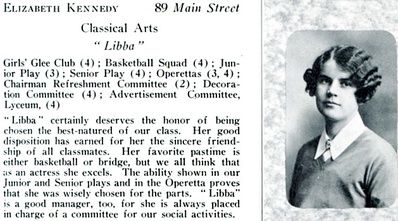 Elizabeth Kennedy in the 1926 Canaras

There were three famous hotels around the eastern end of Lower Saranac Lake: Martin's, the Ampersand, and the Algonquin. John Harding, an Ontario native who was assistant manager of Paul Smith's Hotel, went to work at the Ampersand in 1888. When a hotel called Alexander's went on the market, he bought the place, renamed it the Algonquin and made it famous. The location of the hotel is now the site of the Trudeau Institute, a world renowned research facility where the investigative work begun by Dr. E. L. Trudeau and Dr. E. R. Baldwin continues.

Harding, who was quite active in the community and was for several terms Saranac Lake's mayor, sold the Algonquin in 1920 to William M. Hanes of underwear fame.

In 1906, a six-foot wide addition was built between the Harding Block and Leonards' east building to house a stairway to the upper stories of the former.

Prior to 1917, the Harding Block had two storefronts. The western one housed the American Express Company, the National Express Company and the Postal Telegraph Cable Company. In the eastern one was the Book Store, Harding & Gray, New York Papers. This was a precursor to Hay and Gray's Adirondack Art Company and also to E. L. Gray's Book Store.

In 1917, the Hardings began the process of severing ties with the area in preparation for moving to Burlington, Vermont, where John Harding had made arrangements to buy two major hotels. Due to their association with Paul Smith's Hotel, the Hardings were close friends of Phelps Smith. Another friend of Phelps" was Edward J. Kennedy who had worked for Leonard's, then had gone into a partnership with George A. Taupin at 8 Broadway, and was looking for a place to start a business of his own. Smith got the Hardings and Kennedy together and ownership of the Harding Block passed from Emma T. Harding to E. J. Kennedy in March, 1918.

Kennedy hired the firm of Scopes and Feustmann to design a new storefront for the building, knocked out the interior ground floor divisions, and opened what was for ladies the equivalent of T. F. Finnigan's or C. J. Carey's.

The E. J. Kennedy's store remained in the Kennedy family until December, 1973. It stood vacant for a short period; but, in March, 1974, was sold to Kastern Inc. which transferred it to the ownership of its president, Hans Katzenstein, in August of that year. It was then the site of Katzenstein's Town and Country Shop and of the Parnell Shoe Salon, carrying on a tradition of quality in women's clothing that was begun 65 years before. Other tenants of the building have included James H. LaPan's law offices on the second floor; and, in the large, third floor apartment where the Kennedys lived for many years, Mrs. Hugh Kinghorn resided. (For more on Dr. Hugh Kinghorn, see discussion of the Church Street Historic District.)

The Harding Block is a three-story brick building finely proportioned and beautifully made.

The brickwork is admirable. At each corner, there is a pronounced band, 18 inches wide, running from ground to entablature. These have central, recessed sections divided horizontally at the second and third floor levels where they are joined by bands of pronounced brick lattice-work. To bring the walls out flush with the vertical corner bands at entablature level, there are four oversailing courses.

There is a lovely oriel window in the center of the second story east wall (facing Academy Street) and a huge picture window, center of second story front. The rest of the windows are either single or twinned sash type with heavy but smooth stone sills and lintels.

The entablature is relatively simple; but its frieze is decorated with appealing pateri (these are also on the frieze of the oriel window) . The cornice is quite deep.

On the roof there are two elements never seen from the ground. They are a large skylight that facilitates illumination of the stairway addition and a large, extremely out-corbelled chimney that has begun to lean with age and take on an organic look. Unlike any chimney in the District, it has almost the appearance of a masonry mushroom growing out of the middle of the building's roof.

The rear porches, spanning the entire width of the second and third stories, are in very good and nearly original condition (the second story windows have been changed). They are the best in the District and exhibit much nice detail.

The Harding Block storefront is superlative. It is all blond oak and black carrara glass in original condition, except where the Kennedy sign was replaced. This work of Scopes & Feustmann is based on the post and beam mode of construction.

The storefront design is roughly as follows. At center is a shallow trapezoidal entry with single 3x7 foot display windows on each angled side. The entry is flanked by a pair of 9 x 7 foot display windows. Above the windows and the door is a series of sixteen 1 1/2 x 2 foot leaded lights (nine panes each). Six 9x9 inch posts (four of them beveled) rise from the base blocks to the wall plate above the leaded lights. The posts are located at each end of the storefront and at the four corners of the trapezoidal entry. The posts, with gently flaired braces, support beams upon which rest the studs that divide the leaded lights. The beams, naturally, are the upper limit of the display windows and the doorway. There is also a beam joining the posts that flank the outer corners of the entryway and support four studs, thus com­pleting the line established over the main display windows. All of the studs have flared braces where they join the wall plates. The storefront door has a single large window with what is probably a four-centered arch. Black carrara glass sets the storefront off from the east corner of the building and also encloses an entry to the upper stories. This entry is to the right of the storefront and has the same post and beam treatment. It has dual doors, however; and the windows, therein have Tudor arches.

One last wonderful touch: just above the carrara glass, left of the store front is a small, enameled metal sign on a very weathered, wooden plaque. The white letters on dark blue field spell "Main St."

Missing is an arched gablet that rose above the cornice, center front. In its lunette were the words "HARDING BUILDING".