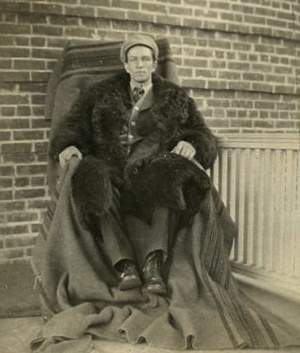 "Harold Chaffee spent time in Ray Brook Sanatorium in 1907 when he was 23 years old. He was originally from the Indian River area and then moved to Castorland." -- Adirondack Experience

He started out as a patient, but may have stayed in the area in another role-- one photograph has the following inscription on the back: "The depot where I served as agent at Ray Brook 1907."

The museum has 15 photographs in its collection showing or taken by Chaffee.

The Lowville Journal and Republican, December 18, 1969

Harold Chaffee, 85, Naumburg, a retired mason and farmer, died Dec. 9 at 4:30 p.m. at Sunset Nursing Home, Constableville, where he had been a patient since August, 1968.

Mr. Chaffee and Martha Zehr were married years ago. Mrs. Chaffee pre-deceased him.

He was a member of First Mennonite Church, New Bremen.

The funeral was Dec. 12 at 10 a.m. at Virkler Funeral Home and at 10:30 a.m. in First Mennonite Church, New Bremen with Rev, Abram Clemens, pastor, officiating. Burial was in the church cemetery.