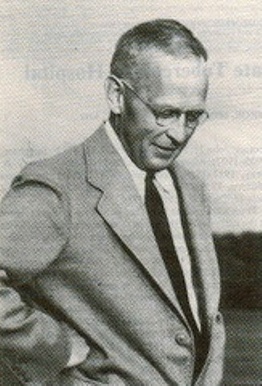 Originally from Ontario, Canada, Dr. Harry Bray was the Medical Director at Ray Brook State Hospital for more than thirty years (1917-1950). He became a doctor after attended Trinity College in Toronto, the University of Edinburgh, and Lakeside Hospital in Cleveland, Ohio.  He is remembered for having a short golf course built on the hospital grounds (1937), along with multiple outdoor parks, walks, ponds, lawns, a new laboratory (1928), and an additional 99-bed infirmary (1939). Joseph Kurung noted Bray's extreme attention to detail and planning to make the hospital as homelike as possible for the patients.

He was a strong believer in the outdoor, rest, and physical activity aspects of "the cure". All year round, patients were expected to sit outside on "cure porches" because the cold, fresh air was thought to be an effective healer.

A "very perfect, gentle knight" died last evening in Saranac Lake. Dr. Harry Bray, who was often provocative as well as gentle, was a warrior against disease through a long and distinguished career, most of it fighting tuberculosis at Ray Brook State Hospital where he was Medical Director for more than thirty years.

Under his strong and imaginative leadership great strides were taken to improve the hospital, both its services and its physical plant. He had a genius for attracting good people to the staff, for spurring them on. His interest in research and medical education was intense, and the compassion that was part of his being accounted for his efforts to help doctors, nurses and other staff people who became afflicted with TB.

Quietly and anonymously he often helped out worthy causes in Saranac Lake and, in turn, was delighted to have help from our people on hospital projects. Thus, Mrs. Francis R. Trudeau, Sr., advised him in redecorating the interior of the hospital so that today it is one of the most attractive and pleasant hospitals in the country.

Harry Bray was truly a man of vision, a man seizing and making opportunities for progress, initiating occupational therapy, out-patient and field clinics and surgery by the hospital staff. It was he who transformed woodland and swamp into the present park-like landscape, letting light and air through the forest to the buildings.

Many fortunate ones in the village loved him for his wonderful, shy sense of humor, for the joy he had in telling stories, for talking about books that interested or excited him. He liked children especially, and what a golfer! He'd be out on the links even when there was snow on the ground.

In short, Dr. Harry Bray loved life. No wonder his going brings sadness to the village and to all who knew him. But, as with anyone of a nature such as his, he will live on with us as long as there is a Saranac Lake, giving us inspiration and courage, making us chuckle, when we think of one of his stories giving us a warm glow around the heart. R.W.T. [Roger Tubby]

Information on Bray from Dr. Fruhlinger

"Dr. Bray and Dr. Trudeau were responsible for making the (Ray Brook) hospital look like a country club."

"Dr. Bray would take in any doctor with TB from across the country, then he would choose his staff from those doctors."