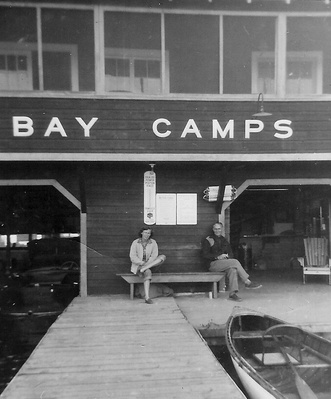 Harry E. Duso, Sr. started the Crescent Bay Marina. He was a World War I Veteran.

He is credited in local lore with having jumped on horseback off of the highest cliff of Bluff Island in Lower Saranac Lake for the silent movie, the Perils of Pauline. Harry's son, Don Duso, however, said that while his father did, indeed, jump from Bluff Island dressed as Pauline, he did not do it on horseback; that was another stunt man, unnamed. 2

Michael Specht (son of Malcolm A. Specht) recalls that channel and obstructions markers on the Lower lake were removed for the winter/ice season and early in the year; soon after ice-out Harru Duso and others would go out and reinstall them. In those days the buoys were made of crossed wooden planks — maybe two by sixes — painted white and topped off by an empty ten gallon paint can also painted — white for obstruction, red or green to mark a channel.

Mr. Duso was known in the community as the judge of a contest, held annually for a time, which involved guessing the day the ice would leave Lower Saranac Lake. He resided in a house on Crescent Bay next to the marina.

He founded the marina in 1924. Mr. Duso had been a resident of Saranac Lake for many years.

He was born in Dickenson Center, the son of Fred and Harriet (Dewey) Duso.

His wife, the former Sylvia Kimball, died in 1952.

Interment will be in Pine Ridge Cemetery in May.

Memorial donations may be made to the American Cancer Society.

Hurled from his speedboat when the steering-gear broke while he was piloting the craft on a trial spin around lower Saranac Lake Thursday morning, H. W. Lockwood, formerly of Washington, D. C, now a resident of The Pines, Saranac Lake, was saved from drowning only by heroic work of Harry E. Duso, manager of the Crescent bay boathouse, and Herb Williams, caretaker of the Guggenheim camp, who went to his rescue.