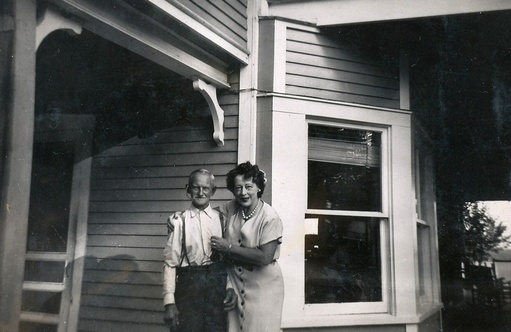 Harry Elmer Freeman was a son of Perez M. Freeman and Mary Snow Freeman of Worcester, Massachusetts. His family moved to Tupper Lake as a child. After his marriage to Lillian Duckett, they moved to Coreys. He was a trapper and Adirondack guide. I was told he guided Fritz Kreisler (violinist, 1875-1962) and Teddy Roosevelt. He guided in the same area as my father, Ross C. Freeman (fishing and hunting). This was the main source of income.

Mr. and Mrs. Harry Freeman who have been spending the past month in their cottage, have returned to Lake Clear Inn, Lake Clear, N. Y.

Mrs. Phoebe Wardner entertained a group of 53 friends and relatives at her home The Rest-U-Well Cottage on Vine street, Tuesday evening. Mrs. Wardner was 71 years old. A musical program interspersed with readings was presented.

Her guests were […]Mr. and Mrs. Harry Freeman, Mr. and Mrs. Theodore Petts and Ross Freeman of Lake Clear; […]

The Freeman's are descended from John Freeman (1570-1622) a haberdasher in St. Ann BlackFriars, London, England, and his son Samuel (1595-1646) who lived the last part of his life in Watertown, Massachusetts Bay Colony. Freeman genealogy is fairly extensive on geni.com, and was documented in an 1875 book by Frederick Freeman. It is archived online here: https://archive.org/details/freemangenealogy1875free/page/n4