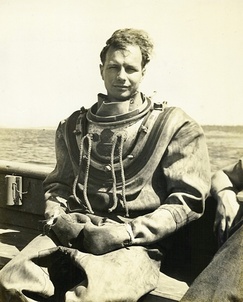 Harry Leonard Fridman, Jr. was a Saranac Lake resident and a World War II veteran. He lived with his family at 8 River Street in 1915 and 19 Riverside Drive in 1930 (per the census), and his mother owned Marinello Beauty Shop. Harry worked as a bellhop at Hotel Saranac during a few summers in high school. He married Carmen Santisteban in 1944 just before shipping off to Japan with the Navy, and he eventually moved to Puerto Rico to be with his growing family after being discharged in 1945. 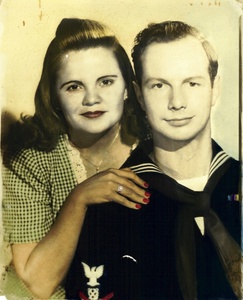 Harry and Carmen. Courtesy of Nannette Fridman Postel.In those days (1940s), many wealthy families from the Caribbean (mostly Cuban and Puerto Rican) sent their children to school up in the states, mostly Catholic schools and universities. Carmen and her sister Angelita were sent to The College of New Rochelle, an all girls school in New York.

The Christmas holidays were short, and for most Latin families, heading home for the holidays was not an option, since the journey by boat would take at least 4 days. It became the "norm" that all the Latins would meet for Christmas and celebrate New Years in New York City - It was always a BIG party.

One Christmas, Angelita met her future husband, Esteban Varas, a Cuban celebrating the holidays with his family and they started dating. Esteban contracted TB and spent some time up in Saranac Lake at Trudeau Sanatorium to cure ( a well known hospital for TB patients - this was pre-antibiotics). Angelita convinced Carmen to go up to Saranac Lake to visit Esteban one long weekend and they took the train upstate.

How Carmen met Bessie (Harry’s mom), we don't know, but I was told they met and Bessie introduced Harry and Carmen. Harry by this time was in the Navy, and they spent most of their courtship writing letters back and forth. In 1944 Harry was with the Navy in Hawaii and was about to have leave on the mainland. Harry called Carmen (in those days you had to make an "appointment" with the operator to get an East Coast phone call) and told her he was about to have leave in San Francisco and soon after be shipped off to Japan - he wanted her meet him there and get married!


Carmen said YES and they hurriedly made the plans. Carmen took the 5 day train trip cross-country and met Harry where they got married and spent his leave together. Carmen took the train back to New York and back to school as Harry shipped off to Japan - again cultivating their new marriage relationship via the postal service. Carmen very quickly found out that a baby was on the way and made her way back to Puerto Rico to be with her family until Harry could get there. Tati (my aunt) was born in May 1945. Harry was honorably discharged from the Navy on Apr 5, 1946 and made his life in Puerto Rico with Carmen (as a journalist and photographer) and had 2 more children, my father Peter and my uncle Eric.

This photograph was published a second time, with a caption reading "Harry L. Fridman, Jr., of Saranac Lake chief boatswain's mate in the Navy, who is stationed in Tokyo. He is a specialist in mine warfare and underwater demolitions working with the Navy in the Tokyo Bay area. He has been in service since November, 1941."
Undated, unidentified clipping in a scrapbook at the Saranac Lake Veteran's Club.