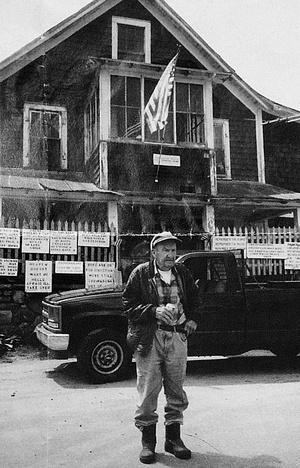 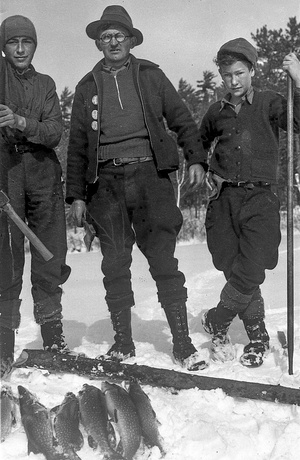 Hayden C. "Bing" Tormey was a World War II veteran. After the war, he worked with his father, Hayden J. Tormey, at Tormey's IGA in Onchiota, and in the 1950s he took over for his father as postmaster of the Onchiota post office.

Hayden C. Tormey, known affectionately as "Bing" to family and friends, has served his country and community with distinction since the early 1900s, and continues to do so.

Bing, an avid outdoorsman and skier, was born in the hamlet of Onchiota in November 1922. He entered the U.S. Army in January 1943 and appropriately was assigned to Company E of the 87th Mountain Regiment of the 10th Mountain Division.

Bing's initial campaign was in the Aleutian Islands to remove the Japanese troops who has occupied the islands of Attu, Kiska and Agattu. After successfully removing the Japanese from the Alaskan Islands in July and August 1943, the 10th Mountain Division returned to the U.S. In December 1943 the company left for Europe to participate in the Italian Campaign. As quoted from the Army publication Yank, "Cocky, special trained troops of the U.S. 10th Mountain Division blast the Nazis from 'impregnable' Mt. Belvedere less than a month after they arrive in Italy."

It says, "For heroic achievement in action on April 23, 1943 near the Po River, Italy. During the amphibious operation at the Po River beachhead, Sgt. Tormey, acting assistant squad leader, found himself and his men separated from the rest of the company.

"While reorganizing, he discovered that he was on the right flank of another Mountain Infantry company whose movements were being checked by enemy machine gun and sniper fire. Without waiting for orders, Sgt. Tormey maneuvered his men and blasted away at the enemy strong points with rifle grenades.

"He was successful in eliminating one machine gun nest and three snipers and allowing the other rifle company to advance and complete its mission as well as allowing him time to rejoin his own company. 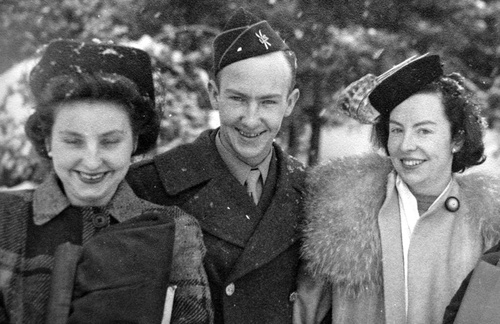 Bing Tormey with his sisters Dorothy Schwartz and Laura Williams
Courtesy of Phil Fitzpatrick"His heroic leadership, resolute aggressiveness and personal initiative have earned him a high place in the lofty traditions of the U.S. Army."

Bing was honorably discharged on Dec. 22, 1945. He now resides in Onchiota with his wife Eunice, in close proximity to his daughter Janet Ordway, son-in-law Ron and grandson Chad. He continues as a symbol of service to his country and community.

Mr. Tormey was a veteran of World War II, serving in the Army in the 10th Mountain Division. After he returned from service in the late 1940s he went to work with his father at Tormey's IGA in Onchiota, in the 1950s he took over for his father as postmaster of the Onchiota post office. He retired from the store in 1972 and from the U.S. Postal Service in the 1980s.

Bing was an Adirondack guide, a fire warden and a member of the Bloomingdale Volunteer Fire Department for many years. He also had been a scoutmaster in the early 1960s.

He enjoyed the outdoors, hunting, fishing and trapping.

He is survived by his wife Eunice, one son, Hayden Tormey II of Lisbon; one daughter, Janet Ordway and her husband Ron of ____; one grandson, Chad Ordway of Onchiota; and several nieces and nephews.

He was predeceased by his parents and four brothers and sisters: Pershing Tormey, Violet Farmer, Laura Williams and Dorothy Schwartz.

Calling hours will be held from 1 to 2 p.m. Monday, May 9 at the Fortune-Keough Funeral Home in Saranac Lake. A funeral service will follow at 2 p. m. at the funeral home with the Rev. Kevin McEwan officiating.