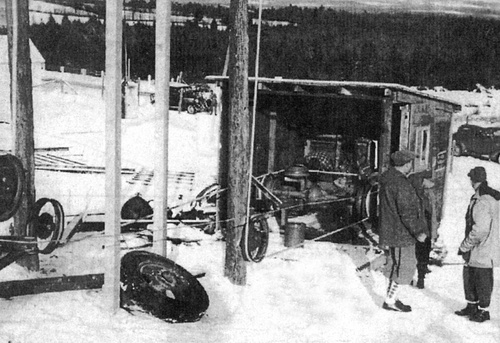 The first rope tow on Mount Pisgah was built in 1938 at Frank Baker's shop at 119 River Street;  was made from a Ford truck. A joint venture between Charlie Keough and Hector Wood, it was sold to the village and used for a number of years. George Ducket, in knickers, and Charlie Keough, at right. Adirondack Daily Enterprise, August 31, 1996 Born:

Guy H. (Hector) Wood, known variously as Hector, Guy, and Woody, and Charlie Keough rigged a rope tow and ran the downhill area at Dewey Mountain from 1938 through 1940.  In 1941 and '42 Keough and Woods owned and operated the Sky View Ski area at Donnelly's. The ski slope used a lift of Keough's design: a tree served as the deadhead while a rope ran off the rear wheels of Ford Truck through a pole and pulley system. The entire lift was powered by the V-8 engine of the Ford Truck.  World War II soon put an end to the operation.

In 1988 Guy H. Wood was a contractor living and working in Speculator, NY.