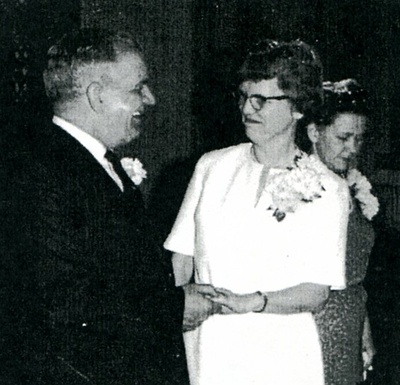 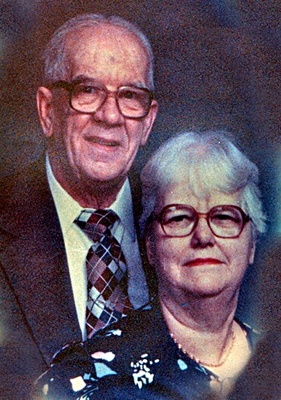 Helen Bell was a tray girl at the Sageman Cottage when she was in high school in the 1940s. There she met Alfred Larsen, one of the Norwegian Sailors who were curing in Saranac Lake during World War II. They kept in touch by mail for twenty years; after his retirement from the merchant marine in 1964, Larsen wrote to Helen asking her to come to visit him in Norway. She wrote back suggesting that he should visit Saranac Lake in stead. Several months later, in the summer of 1964, without answering her letter, he arrived in Saranac Lake. On December 26, 1964 she married Alfred Larsen in the First United Methodist Church. They settled on Lake Street, and later moved to Helen's family home at 4 Jenkins Street.

Helen worked at F. W. Woolworth, and later at the Saranac Lake News. As of 2013, Helen Larsen is still living in Saranac Lake.

Check out the Helen Larsen Interview for more information on Helen and her life in Saranac Lake.

Helen's obituary was published in the Adirondack Daily Enterprise on May 3, 2016.

It's a long story that begins on the day the Germans invaded Norway. Alfred Larsen left his home town and home port, Bergen, arid sailed into the North Sea aboard the tanker Egba. Later, he was on other ships, sailing to such distant ports as Liverpool, England; Monrovia, Liberia; and Jamaica, West Indies. His duty was hardly all exotic, however, since in the course of his wartime service, he was on three ships that were sunk by German U-boats.

Then on Feb. 12, 1943, in New York City, Larsen was diagnosed with TB. He was sent to Saranac Lake, the doctor in New York telling him it was a good place to be. Years later, Larsen said of his reaction at the time, "I didn't even know what a Saranac Lake was."

He soon found out, as he settled in the Sageman Cottage, along with other Norwegian sailors. This may have been a comfort to him, since at the time he spoke no English. But he changed that by taking English courses at the Guild from Mrs. Levy, and quickly became fluent.

With his new fluency, he made a new friend. She was Helen Bell, a local high school girl who was a "tray girl" and all-around house-keeper at the Sageman Cottage.

When the war ended in 1945, Larsen was cured of TB, and so returned to Norway, where he later rejoined the merchant marine. He stayed in the merchant marine for the next 19 years, sailing everywhere, according to him, except Greenland. But no matter how far away from Saranac Lake he was, he never lost touch with it, for he and Helen Bell remained steadfast — if not world-class pen pals: Helen estimates she wrote him a letter a week the entire time. While she's not sure if he wrote back as often, she said he answered most of the letters.

"And he always sent a card from every port," she said.

In the summer of 1964, Larsen retired from the merchant marine after 31 years, and he wrote Helen, asking her to come to Norway. She wrote back, telling him to come to Saranac Lake. She heard nothing more from him.

Then one day (a couple of months later) there was a knock on her door. When she opened it, there stood Alfred R. Larsen. They never again wrote each other a letter, nor did they have to, since after that day they were never apart.

About a month later, he asked her to marry him, and she accepted. After a 20-year, long-distance courtship, they were in no hurry to marry, but Larsen, being an old-fashioned gentleman, first had a formality to take care of: In December 1964, he asked Helen's mother for permission to marry her daughter.

He hadn't told Helen he was going to ask her mother's permission, but that didn't matter to her.

"She would've given permission anyway," Helen said. "She liked him."

Then she added, "Everyone liked him."

On Dec. 26,1964, Helen and Alfred were married in the First United Methodist Church in Saranac Lake. Aside from their wedding, there was something else memorable about the day: There was no snow on the ground.

"I couldn't believe it," said Helen. "It was a green Christmas — back when we used to get real winters."

That summer, Alfred's visa expired, so he and Helen decided to go back to Norway to wait, for his green card to get processed. They both sailed back on a Norwegian tanker.

As Helen put it "I was part of the crew, or the baggage — what-ever you want to say."

The Larsens settled atop Lake Street Hill, eventually living in her family home on 4 Jenkins St. Alfred worked for Will Rogers Hospital and the Saranac Lake General Hospital; Helen worked for Woolworth's and Saranac Lake News.

Aside from a two-week visit Helen and Alfred made in the 1960s, Larsen never returned to Norway. But he continued to pay homage to his homeland and his fellow sailors. Every May 17, Constitution Day (which is the Norwegian equivalent of a combined Independence Day and Memorial Day.) he made a special visit to the Pine Ridge plot.

After Alfred's death, Helen had her own Constitution Day ritual: She put an announcement in the Adirondack Daily Enterprise and on WNBZ-AM, wishing all Norwegians a happy Independence Day. After several years, she stopped, since she had never received any replies.

"I guess: there weren't any Norwegians around anymore," she said.

They never owned a car, and Alfred rode a bike to work, he also loved to walk, and he would carry groceries back from the downtown stores — sometimes twice a day.

"It's what kept him healthy," Helen said, "walking up arid down Lake Street Hill."

In 1988, after 24 years of marriage and 45 years of friendship, Alfred Larsen passed away. Helen is hale and healthy and living in the Dechantal Apartments.

None of the thousands of letters the Larsens wrote each other survived a half century's house-cleaning. But something Alfred wrote on a questionnaire for Historic Saranac Lake's 1987 reunion of former TB patients did survive, and it speaks for itself.

The question asked: "Has TB changed your philosophy of life, and how?"

Alfred's answer was: "Yes. I came here and met my wife, and we are enjoying every minute of it."

Born in Saranac Lake on Dec. 5, 1924, she was the daughter of Jesse "Ray" Sr. and Elizabeth (Homburger) Bell. Helen married Alfred Larsen on Dec. 26, 1964, in Saranac Lake. He predeceased her on March 3, 1989. Mrs. Larsen was a lifelong resident of Saranac Lake and was employed for the Saranac Lake News Company. She is a life member of the Eastern Star, Saranac Lake Adult Center, and the First Presbyterian Church. She especially enjoyed bingo and search word puzzles.

She is survived by one sister, Betty B. Haig of Saranac Lake, and many nieces, nephews, grandnieces, grandnephews, great-grandnieces, and great-grandnephews. She was preceded in death by her father; mother; three sisters: Marie Schenck, Ruth Orsini, and Jacqueline Gonyea; and one brother, Ray Bell, Jr.

Funeral arrangements are in care of the Fortune-Keough Funeral Home in Saranac Lake. A graveside service will take place at the convenience of the family in Pine Ridge Cemetery in Saranac Lake.