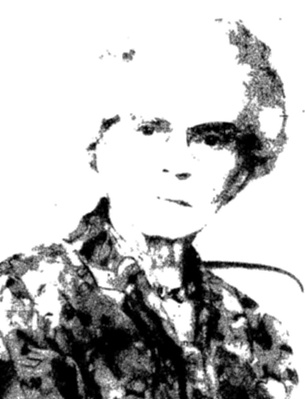 Helen Escha Tyler, known as Mrs. Albert Tyler, wrote a column in the Adirondack Daily Enterprise, "This 'N' That," on times gone by in Vermontville. Starting in 1931, she wrote of news and social activities in Vermontville. This 'N' That debuted in 1954, and continued through at least 1964.

Mrs. Tyler had lived in Vermontville since 1917, and, in 1977, the members of her church there honored her with a special service at the Church of the Nazarene and the awarding of a distinguished service award, "for all the kind deeds and many years of service she has given to the church and the people who attend it."

Mrs. Tyler, perhaps, best served the people of her township through her writings, both in books and newspaper articles and later in her Vermontville column entitled, "This 'N' That." Daily Enterprise records show she brought her first news story to the newspaper office in 1931. She was then 39 years old. It related, in detail, a fire in which the Town of Franklin sheds were burnt to the ground, and was the start of many, many stories Mrs. Tyler was to write for the newspaper about her hometown.

Three decades later, she was still writing for the newspaper, but had left the printing of more mundane news stories to other writers in favor of a column flavored with colorful stories of "real happenings." "This 'N' That" was unique in that it was always prefaced with a quotation from Biblical scripture.

From that column, she penned her first book, "In Them Thar Hills," which came off the presses when she was 76, and which, she said, was an intermingling of Adirondack tall tales and recountings of real events. A second book, "Log Cabin Days," was published when she was 78, and she penned a third book, "Mountain Memories" when she was 83. A fourth book, "This 'N That" was written when she was 91. In each volume, with humor and wit, she told her stories of the people of her area with dignity and affection.

A fifth book, "Born Smart," a biography of Paul Smith, has just been finished.

The woman who could so aptly, and lovingly, describe the people and places around her was not a Vermontville native.

She was born in Lewis on Feb. 19, 1892, daughter of Mortimer and Orra (Reynolds) Moss and attended grade school in Lewis and high school in Elizabethtown.

She moved to Vermontville in 1917 when she married Albert Tyler, a local farmer. They continued to live in the community all of their lives. She became a very active member of the Church of the Nazarene and was church treasurer for 37 years.

Mrs. Tyler had also been school tax collector for the Town of Franklin for many years.

She traveled extensively in Florida, California and many other states, and the places she visited were often mentioned in her "This 'N' That" column.

Survivors include two daughters, Phyllis Tyler of Vermontville, with whom she made her home, and Mrs. Floyd I. (Martha) John of Burtonsville, Md.; three grandsons, Floyd Albert, Bruce and David, all of Kansas; a sister-in-law, Mrs. Goldie Tyler of Saranac Lake; a brother-in-law, Robert Goff of Vermontville; and many nieces and nephews.

Today, daughter Martha remembered her mother as a woman who "had great pride in her children." She said her mother encouraged both her and her sister, Phyllis, to get a college education, and even went as far as to travel to California to take care of Martha's three sons for six months when she worked toward her doctorate. Dr. Martha Tyler John was awarded a doctor in education degree from Stanford University in 1966. Today, she is Dean of the School of Education and Human Services of Marymount University in Arlington, Va. Her husband, Dr. Floyd John, is a Senior Cryptologic Mathematician, working for the federal government. Sister, Phyllis, became an elementary school teacher, taught many, many area children and retired just recently from the Saranac Lake Central School District.

Callings hours for Mrs. Tyler will be held from 2 to 4 and 7 to 9 p.m. today at the Fortune Funeral Home.

Memorial donations may be made to the Helen E. Tyler Memorial Fund at the Church of the Nazarene, in care of the funeral home.

Mrs. Albert Tyler and daughter, Miss Phyllis Tyler, spent the Christmas Day weekend at the home of Dr. and Mrs. Floyd John of Wayland, Mass. They returned home on Christmas Day and brought the three John boys- Floyd, Bruce and David- home with them as they were anxious to "go to Grandma's to play in the snow." Upon arriving in Vermontville they found they had left more snow in Wayland, but they skated, and slid down hill , and soon there was more snow. Their parents came late Friday evening after first shoveling a fifteen inch depth of snow from their driveway. It had rained Thursday night after much of the snow had fallen and then snowed again so it was very heavy work. There seemed to be no one to hire for the job. The whole family, tired but happy, and every one with a bad cold, returned home Sunday afternoon.

VERMONTVlLLE - A special service was held Sunday night at the Church of the Nazarene in honor of Helen E. Tyler, a former columnist for this paper.

Mrs. Tyler, or Helen as she is known to all, was escorted to the front of the church, following an opening prayer by the. Rev. Christensen, by her son-in-law, Dr. Floyd John.

Donald Symonds presented her with a distinguished Service Award for all the kind deeds and many years of service she has given to the church and the, people who attend it.

A corsage given by Wolff's Florists was presented to her and pinned on her by Dr. John. More than $215 was donated to be given in her name to foreign missions.

Martha and Phyllis sang a duet accompanied by Flora Shene at the piano. David John, a grandson played a trumpet solo, after which the hymn was sung by the congregation with his accompaniment.

A poem of Helen's many accomplishments as listed by the Congregation was composed by Gentry Symonds and follows;

If I were Helen Tyler I'd talk to young and old, I'd visit far and near Tell stones that are bold. I'd visit people who are sick And bring some pansies too

If I were Helen Tyler That's what I'd surely do. She's always there when you need her So never be afraid Cause there stands Helen Tyler She'll never go away. She brings people to the church She married a farmer, too She lost a son, writes books And wrote newspaper news to read.

Frank Cass, a charter member of the church, gave a little talk on Helen's early life, its sadness; happiness,. and many days of hard work with little money to meet the family needs. One incident he told about was working with Shermond Banker, a former resident for many years, and Albert Tyler, Helen's husband, at the home of Silas Lamson. Mr. Banker said to Albert "You are no rolling stone, you gathered Moss." Helen's maiden name was Moss. She and Albert were married in 1917 shortly after she moved here from her home town of Lewis.

A very pretty cake in the shape of the church was made by Mrs. Herring.

Linda Herring and Shelly Symonds helped set up for the refreshments and also served.

All the people In the Town wish to congratulate Mrs. Tyler and wish her many more years of continued service.