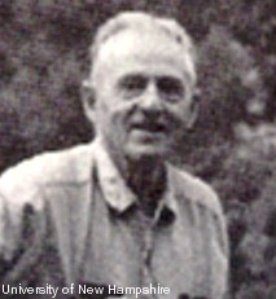 Henry Baldwin grew up in the family home at 6 Church Street. A graduate of Yale University in 1919, he studied forestry in Germany and Scandinavia and returned to Yale to earn a master's degree in forestry and a Ph.D. in botany. He taught at briefly at Saranac Lake High School in 1919-20. He was the author of ten books and a number of scientific papers; The Skiing Life, the story of his experiences as a trailblazing skier in the Adirondacks and the White Mountains, was published privately in 1991. At the time of his death, he was secretary of his Yale class of 1919. He was a flying officer during World War I and an intelligence officer in World War II, leaving the Air Force as a lieutenant colonel.

In a piece he wrote for the 1937 yearbook of the National Ski Association, he wrote "My father [...] recalls that John R. Booth of Ottawa, of the famous lumber family, [in 1892] rented for the winter the Roberts Cottage 2 in Saranac Lake where his daughter "cured" for several years." 3  Booth brought a pair of skis with him, thus introducing the sport of skiing to the area.

Henry Baldwin donated a collection of his books to the Adirondack Room of the Saranac Lake Free Library.

At the time of his death, his children privately published his "Saranac Memories," copies of which they recently donated to Historic Saranac Lake, St. Luke's Church and the Adirondack Collection of the Saranac Lake Free Library.

1. Social Security Death Index
2. This is apparently not the Roberts Cottage on Park Avenue, which was not built until c. 1917, but it may be the Joseph Roberts Cottage on River Street
3. Henry Ives Baldwin, "The Relative Antiquity of Skiing in the Adirondacks", in American Ski Annual Official yearbook of the National Ski Association, Steven Daye Press, Brattleboro, VT, 1937. p. 58.