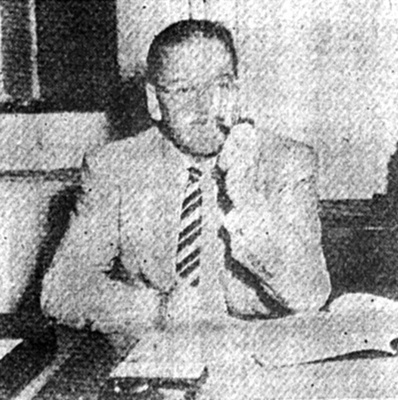 In 1974, Henry V. Larom published Backtrail: Selected Poems. These included "Old Beany," about fishing with Beanie Barnet, and "Porch Sleeper (Saranac Lake 1910)." The book is catalogued in the Adirondack Collection of the Saranac Lake Free Library as L329b.

Henry V. Larom, former Saranac Lake resident whose name is known to the younger set as author of the "Mountain Pony" series, has been appointed Dean of the new Rockland Community College by the Board of Trustees.

The county weekly this week published a front-page story, with picture, and devoted its brief editorial comments to Henry Van Berger Larom, late of Montana University, but a native (Saranac Lake) New Yorker."

The editorial continued: "Mr. Larom is 56 years young and proves his interest in the younger set, aside from his background of college and high school English teaching, by an avocation of writing books about the West for children. . . The new Dean believes in being a teaching educator and makes some uncomplimentary references to "administrators" who won't teach. We wish him and the County good fortune in their new relationship."

Mr. Larom's education began at the Saranac Lake High School and Manlius Military School and continued at the University of Virginia where he received his A. B. degree. His Master's degree was earned at Montana University where he has been professor of English in the undergraduate and graduate schools since 1950. He left Saranac Lake in that year. He and Mrs. Larom had resided at 76 Bloomingdale Avenue, and their sons, Henry Jr., and David attended Petrova school.

In this capacity he has been in charge of a writers' conference using such authors as Van Tilbury Clark, Alan Nevins, and Van Wyke Brooks.

Prior to his teaching career, Mr. Larom was associated with a New York advertising agency and did motion picture producing and editorial work for The New Yorker.

His first book was written in Saranac Lake after he returned here for his health. Two books won the Boys' Club of America award and another "Ride Like the Wind" was on the Brotherhood List last year. Several of his books have been translated into foreign languages.

Part of Dean Larom's immediate concern will be to recommend teachers for the basic freshman subjects of English, history, mathematics and sciences.

Copy of a manuscript by Elise Chapin, dated September 1, 1990

In addition to being Dean of Rockland Community College, Henry Larom became head of the English Department. He wrote six children's books which were widely acclaimed; and he received the State University's Chancellor's Award for distinguished teaching. It was not until the last two years of his life that Henry wrote poetry. His poems brought images of his past accurately and clearly into being again--closing the gap between "then and now."

Chill woke me in the night
To a world tight with frost
From porch windows
Snow crust reached the cliffs
Streaked in ice.

Somewhere a tree cracked
In loneliness.

And my breath
Frosting the blankets
Ran as shallow
As an ice-filled stream.

Until I heard the bells
Clear and sharp as icicles.

My mind's eye saw them
Perched above the horse's neck.
The sleigh, like my father's,
Red (with two scarlet pom poms)
Slicing through the night,

Then something urgent --
An increase in rhythm,
A slap of the reins
Across the horse's back --
And I knew that snugged
Under a buffalo robe,
His feet on a heated soapstone,
The doctor drove toward
The midnight hemorrhage.

2013-01-04 15:11:10   Thanks, David Lee Larom! If you have more to share, please feel free. We'd love to have a better photograph than the rather poor one from the Enterprise! Would you email me at [email protected]? Thanks. —Mwanner

2013-05-04 07:43:47   What a lovely section on Henry V. Larom. His Mountain Pony series was a favorite of my family in the 1970s. My father read them to my brother and me before bed several times. I found this site one Saturday moring as I was looking for information on books I can share with my sons and decided to find something about the man who wrote one of my favorite series. That lead to a very pleasant morning reading about Sarnac Lake, meeting Old Beany, and learning a little bit about the man behind the author's plate. What a remarkable man and a wonderful story. Thank you for putting this together. —76.113.221.209