A brick at the Saranac Laboratory has been dedicated in the name of Dr. Henry Leetch by his daughter, Katharine L. Roedel. 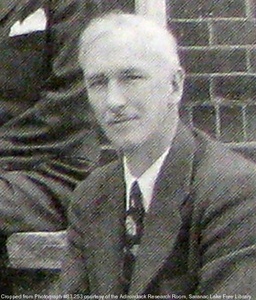 Henry Winship Leetch, M.D. came to Saranac Lake for the cure in 1929, and stayed for about three years. He first cured at 5 Shepard Avenue with J. Woods Price as his physician. He returned to George Washington University to complete his medical degree and residency, broke down, and returned to Saranac Lake to heal and to stay. He was in practice and lived in Saranac Lake for over forty years. Dr. Leetch took Spanish lessons from Alfredo Gonzalez so that he could communicate with his Spanish speaking patients. He was also Bela Bartok's doctor. He was a tuberculosis specialist with an office at 108 Main Street, initially a shared practice with Dr. Edgar Mayer. Years later he had an office on Academy Street with Dr. John N. Hayes. He lived near Moody Pond at 3 Johnson Road from 1932 until his retirement. Dr. Leetch retired to Vero Beach, Florida in 1965.