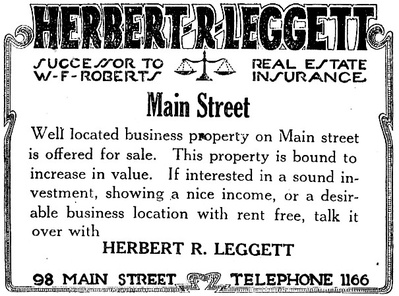 Often called H. R. Leggett, Herbert R. Leggett was a businessman in the fields of insurance and real estate. He bought and consolidated the interests of both William F. Roberts and F. H. McKee when they retired. Since as many as nine cure cottages were known as the Leggett Cottage, he apparently owned and operated them or owned and leased the premises to others for operation as part of his real estate activities. He lived at 22 Kiwassa Road from 1925 to 1969. His office was at 98 Main Street until the 1960s, when it moved to 78 Main Street.

Announcement was made of the purchase by Herbert R. Leggett, 98 Main street, of the F. H. McKee real estate and insurance agency, 80 Main street. The consolidation of the two businesses under Mr. Leggett terminated 23 years of activity in the fields by Mr. McKee.

Belated birthday congratulations to Mr. Herbert Leggett of 22 Kiwassa Road who was 94 years old on Dec. 9. Mr. Leggett is a wonderful example of the curative powers of Saranac Lake air He came here from Ottawa to cure in 1901, returned home in fine condition, returning here in 1920, knowing this was where he wanted to settle. In 1921 he and Miss Helen Distin were married in the Presbyterian Church.

He is survived by his wife, the former Helen Distin; a daughter, Ann Ersted; three grandchildren, and one nephew and two nieces.

Mr. Leggett moved to Saranac Lake permanently in 1918 after spending time and vacationing here for his health for 17 years.

He owned and operated a real estate business in Saranac Lake for 45 years, until retiring in 1964.

Mr. Leggett's business associations put him in contact with many of the famous people who lived in Saranac Lake during the tuberculosis cure era, and he could recount many anecdotes about them.

One of them concerned Albert Einstein who rented a house here through the Leggett Agency. According to Mr. Leggett, Mrs. Einstein wrote a check for the agreed amount while explaining that she took care of family financial matters because Albert had no head for figures.

Mr. Leggett was a member of the Elks, Rotary Club and active in the Presbyterian Church.

Funeral arrangements, still incomplete, are being handled by the Fortune Funeral Home.