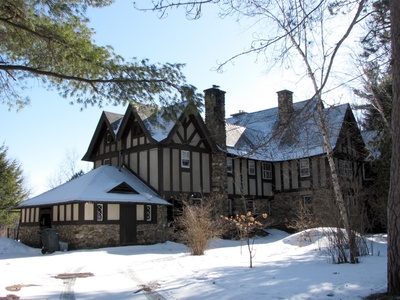 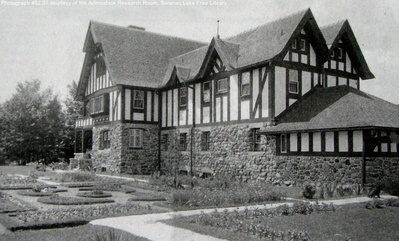 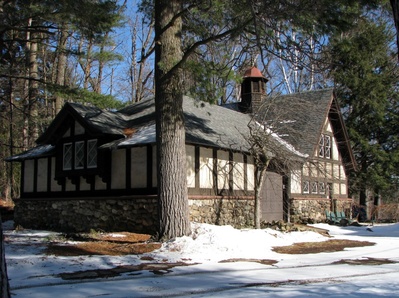 A Tudor Revival-style house, it was built by Agnes S. McIntosh, who gave it its name. It was the second house built in Highland Park. At the time it was built, the house and grounds had a sweeping view of the village, Saranac River, and the nearby mountains from east to southwest.

Dr. Joseph Nichols purchased the cottage on September 14, 1906. The carriage house, designed by W. L. Coulter, was added in about 1907. Dr. Nichols died in 1918; after his death Mary ("Mae" Nichols), who was eleven years younger than her husband, continued the reputation that they had established for hospitality for another 46 years.

The property was renowned for its gardens, created with the assistance of a young Danish gardener named Charles Anderson.

The first purchasers of the lot at 127 Park Ave. were George Duryee and wife. They sold the lot to Agnes S. Mclntosh on Sept. 18, 1900. In 1904, she had the present main house built, reportedly for a cost of $10,000. The work was done by Branch and Callanan according to a design by the firm of Coulter and Westhoff. It was the second house to be erected in Highland Park, the first being 143 Park Avenue.

Agnes McIntosh, then Agnes Huggins, died some two years after her house was completed, and on Sept. 14, 1906, her estate sold the property to Dr. Joseph Longworth Nichols, who was ill with tuberculosis and moved to Saranac Lake with his talented and considerably younger wife, Mary Morgan Nichols. [Sic. In fact they did not marry until 1910.]

Dr. Nichol's mother, Maria Longworth Nichols (Storer), had founded Rookwood Pottery in Cincinnati in 1880. During that institution's golden years, the master potters at Rookwood produced some of the finest pieces of ceramic ware in the history of the craft in the United States. Rookwood was the first true "art pottery" in America and by 1890 was being closely watched and even copied by such venerable European potteries as Sevres and Meissen.

Within four days of Dr. Nichol's purchase of 127 Park Avenue, plans were completed to change the arrangement of the second floor. Originally, that floor rather peculiarly consisted of five bedrooms, one unheated bedroom, and a large bathroom beyond which were two more small bedrooms — presumably servants' quarters. Following the new plan, the unheated bedroom became a bathroom and one of the other bedrooms became two bathrooms, leaving a second floor with four bedrooms (all heated), four bathrooms, and the two-room servants' quarters.

The building's exterior is cobblestone faced on the lower story, and its upper half is half-timber and stucco. Windows are not large but plentiful, and diamond panes abound. The use of gables is liberal including a gabled porch over the handsome entryway and double gables at the north and south ends. The house is punctuated by four cobblestone chimneys. At the north end of the building there is attached what was probably the gardener's workshop and tool shed.

Inside the house, one is immediately struck by the spaciousness of the rooms. The foyer, living room, dining room, and library all have fireplaces. The pantry is average, but the kitchen is one of the largest rooms in the house, as a result of recent changes. In the dining room there is a small bay window (four feet by three feet) that contains 76 panes of glass.

The foyer is quite impressive, spanning the width of the house and accented by a beamed ceiling and a triptych of Tudor arches.

From the foyer, under one of these arches, a broad, ornate stairway leads to the second floor where there are fireplaces in three of the four bedrooms. Two of these bedrooms are large, and two are very large. The bathrooms are not really generous but certainly not cramped. The one cure porch is surprisingly small, barely large enough for a single cure chair.

By comparison to the rest of the house, the servants' quarters seem quite constricted, but the rooms are actually on a par with many modern day village apartments.

Above the second floor, there is a full attic.

On April 25, 1907, plans were completed for and construction begun on the carriage house. While conforming to the half-timber, stucco, and cobblestone design of the main house, it is in its own right an outstanding and substantial structure. The plans bear the imprint of William Coulter.

The architectural firm of Coulter and Westhoff was an early link in a long chain of talent. The current link is the firm of Wareham and DeLair.

William Coulter was a master architect who moved to Saranac Lake and opened an office in 1895. On his drafting table, many of the greatest of the "Great Camps" took shape He was joined at around the turn of the century by Max Westhoff. In 1907, the year the Nichols' carriage house was built, a young man by the name of William G. Distin joined Coulter and Westhoff. At about the same time, Westhoff bowed out but designed buildings in the area at least until 1913.

Coulter left in 1912, and William Distin carried on alone for 38 years, forging a reputation as one of the deans of Adirondack architects. Famed for his work on a number of the Great Camps as well as large public buildings in the area, he was also responsible for several private dwellings in Saranac Lake. Less renowned than the camps and less visible than the public buildings, these are nonetheless superbly crafted structures in the half-timber and stucco-style which became a hallmark of the Distin vision. It may well be that one of his first projects and a formative force for that vision was to assist Coulter in designing the Nichols' carriage house.

Dr. Nichols died early in 1910 [sic. Nichols died in 1918] and left the property at 127 Park Ave. to his widow. She would remain there another 54 years. 2 For five and a half decades. "Mae" Nichols (youngsters called her "Aunt Maie") was a name associated with a warm and gracious home, a home that was a gathering place for nearly all of Saranac Lake's physicians (and their families) as well as all the residents of Highland Park.

She is remembered as having been a kind and generous lady with her employees as well as with her guests. One employee, Edna Bryant, who came to fill the positions of cook and housemaid, decided to try the situation out for a month and stayed 22 years.

It was during this time that a young Dane, recalled now only as Charlie, moved into the rooms on the second floor of the carriage house Charlie was a gardener and Mrs. Nichols' invaluable assistant in the care and maintenance of the fruit of her talents, for she was a graduate in landscape architecture from the Philadelphia Arboretum and her gardens on the vast lot at 127 Park Avenue were hailed year after year as without peer in the village.

These gardens were for a time subject matter for the painter, Jonas Lie (1880-1940), whose work has received much acclaim in recent years. In the mid-1920s he lived at 145 Park Avenue while his wife was being treated for tuberculosis. A large canvas of his (though not of the gardens) hangs in the main reading room of the Saranac Lake Free Library.

On May 16, 1964, Mary Morgan Nichols died. There were no immediate survivors and the bulk of her estate was auctioned off by the executors — her nephew, Rowland Morgan, and her friend and neighbor, Attorney F. Ferris Hewitt. On September 1, Isadore D. Kriff, a furniture merchant from Malone, bought the house and grounds for approximately $14,000.

After the transaction, Mr. Kriff asked Edna Bryant: "Are you without a home now?" She answered that she was not, that she had a home in Vermontville. He told her that if she had no place to go, she would be welcome to continue living in her rooms at 127 Park Avenue, no recompense expected.

Title to the property was transferred to Herbert Kriff on October 31, 1969. He sold it to Robert J. and Judith G. Virostek on January 3, 1972. The property was purchased by Bernadette and William Sirocco on December 4, 1978.