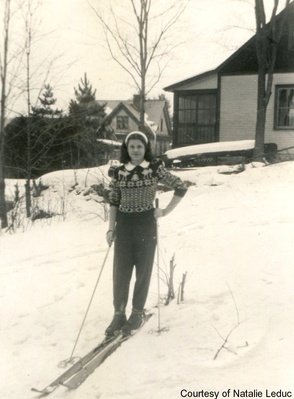 Natalie Bombard, 1946 In 1892, when lumber baron John R. Booth of Ottawa brought his daughter to Saranac Lake to be treated for tuberculosis, he also brought a pair of skis, introducing the town to a sport that would become part of its heritage for generations to come. 1

The locals quickly had some skis made by Napoleon Bailey, a carpenter at Branch and Callanan's mill (formerly located near the Union Depot). Bailey, who had become familiar with skiing in Wisconsin, made his skis of beech, yellow birch, or black cherry. They were four to five inches wide, and tapered to a point in front. An iron runner was later added down the center for straight running. 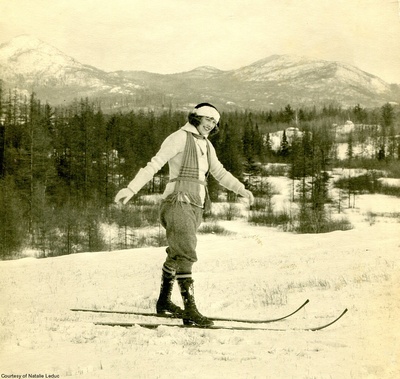 Unidentified skier (undated) In 1914, Dr. William A. Soper settled in Saranac Lake bringing with him the latest German and Swiss equipment with which he demonstrated the latest downhill swings.

About 1918, when jumping was becoming popular, a jump was constructed on Blood Hill and weekly contests were held by the 105 members of the Saranac Lake Ski Club. An exchange of visits was held with the Montreal Ski Club resulting in improved techniques. This and other skiing activity in the Adirondacks culminated in the organization of the U.S. Eastern Amateur Ski Association in Saranac Lake in 1922 at the annual banquet of the Saranac Lake Ski Club in the Berkeley Hotel in 1922.

Skis from the attic at 90 Park Avenue.
Note the size of the pair at left, possibly used for ski jumping at the Turtle Pond Club.  The initials T.P.C. are on the bottom of the ski tips.
Courtesy of John Mills.The publication, Ski Trails of New York State, listed Kiwassa Lake XC Trail and the Mount Baker Downhill Ski Trails in 1937.

From 1938 through 1940, Charlie Keough and Hector Woods operated "Sky View" on Donnelly's hill on the Harrietstown Road with a rope tow. This was a popular skiing spot until the advent of World War II, when the need to travel by automobile (with rationed gasoline) to reach the site led to a development closer to the village.

During the season of 1940-41, Tom Cantwell and Bob Demerse moved a derelict ambulance to the top of Betters Hill on Kiwassa Road. One of the rear wheels served as the drive mechanism for a rope tow and served well the ever increasing number of local skiers. New downhill maneuvers were performed here by Tom Cantwell, Bob Distin and Bill Distin, Tom Clement, and Bob Brown.

The next year, Charlie Keough and Guy Wood operated their tow on Dewey Mountain for only one nearly snowless winter.

From 1946-1950, Curt Wamsganz and his brother Pappy operated Sky View again, but a more popular area was becoming known closer to the village.

In 1938, Tom Cantwell, Joe Parry, and John Duquette were the first to discover the advantages offered by a slope on the former Joe Branch farm on the back of Mount Pisgah. It was within walking distance of the village and proved to be a good practice area between trips to larger ski developments. At that time it was called Trudeau Hill. 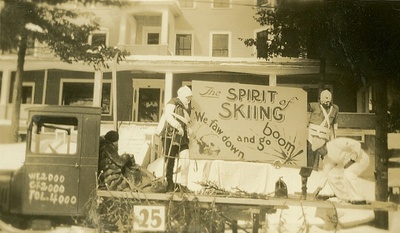 Over the next ten years the site became more popular, and in 1948, a request was made to the village board to consider acquiring the property to serve as a community ski center. On November 15, 1948, the board discussed a lease on the property with an option to purchase it. The next day, the lease agreement of $500 per year and a sale price of $16,000 was signed. The ski tow equipment from Sky View was purchased and moved to Mt. Pisgah. The first 32 days took in $564.55 with expenses of $421.68. The village ski center was off and running.

On December 16, 1950, a dedication ceremony, presided over by Mayor Alton B. Anderson, declared that the 100 acres would become a living memorial recreation center to honor all of Saranac Lake's verterans who gave their lives in the service of their country. A suitable plaque was inscribed which is now (2009) installed in a place of honor on the fireplace at Mt. Pisgah Lodge. 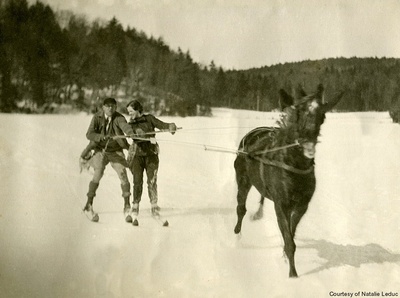 Due to the evident popularity of the center, the board, on June 1, 1953, offered a resolution to purchase the property. On December 30 of that year the property was deeded to the village by Harland Branch. The express purpose of the acquisition was "to supply a recreational area for the pleasure, health, and comfort of community citizens."

From 1952 to 1969 the Saranac Lake School System provided free ski instruction and transportation for every child attending grades two through eight. It was one of the earliest programs of this kind conducted in the East. Each school was given its own day and classes were held five days a week under Natalie Bombard Corl (now Leduc) local PSIA Certified Instructor. "Clayt" Woodruff was the hill manager during these years.

In the years that followed, much has changed— snow-making was added in 1989, and a new lodge was built to replace the old, beloved lodge which had been deteriorating. But the ski area is still a wonderful community asset.

Adapted from "The Story of a Village and a Ski Center," an original article by Natalie Bombard Corl Leduc in "Saranac Lake Flavors," a fund-raising cookbook published by The Friends of Mt. Pisgah, 1997.