Hjalmar Berentsen was one of the Norwegian Sailors who came to Saranac Lake for the fresh air cure. Berentsen was a cook on the ship D/S Bris that was sunk by a German U-boat on the evening of April 20, 1942, two days out from Baltimore en route to Brazil with a cargo of asphalt and flour. On the afternoon of May 2, the survivors were spotted by American aircraft, which dropped some food and water, and radioed for help. Two days later they were picked up by an American tanker five miles from Cape Fear, North Carolina. In all, five crewmen died and twenty survived. For more details, see warsailors.com. Berentsen must have contracted tuberculosis, as he ended up in Saranac Lake, where he cured at the Leonard Cottage on Park Avenue.

After his return to Norway, Berentsen sent this letter to Mark Carson, the owner of Mark's Bar.

Hi Mark. How are you, your wife, and every body else? Bet, you are surprised, there come a letter, allway from Norway to you. Well, as you know, how thing is in this world now. nothing chsuld surprise, any body no more. Aboard the ship, on our way too Norway, we did talk a lot about Saranac, and all those nice places, there is in that city. I did told the boys, I would send a card or a little note too you, and they all told me right then, too give you theyr best regards. We all hope we will be back there some time. You see Mark, we all liked Saranac very good. I think your Bar room, was the one we liked best of them all. Hope you don’t mind me saying so. How is all the nice ladys there use too go in your place. Say “skaal” too all of them from us Norwegian. Here in Norway, we don’t get very much too drink. Two Bottle, every third month. The beer we have, just like rootbeer. They do say, will be better after Christmas. Well, I for one like too see that first before I believe that. Things in generally is not so good. Can’t excpect any thing else, after the Germans was here, and clean out. Bet you have a hard time, too read this, my English is not so good. Us boys there was in Saranac, and around there, are now all over Norway, some whent home, other one too rest home. Then some too Sanatorium, the food is not so good. If you have time, write me a little note. You know, I like too hear how things goes over there. Perhaps I will be back some day. The best of luck too you. Hope there will allways be a crowd in your place. From one of the Norwegian boys, there was living in 15 Park Avenue. Regards Hjalmar Berentsen Merry Christmas. A happy New Year too all of you. 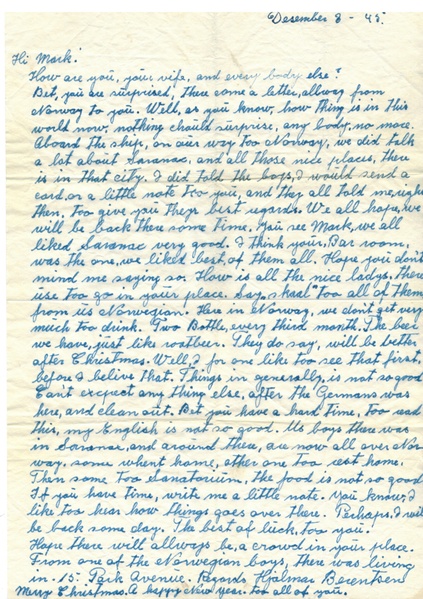 Hjalmar Berentsen letter. Click on the image to enlarge. The letter is in the collection of Historic Saranac Lake, and was provided by Debbie Mitchell Khan, April 25, 2012, via Natalie Leduc. 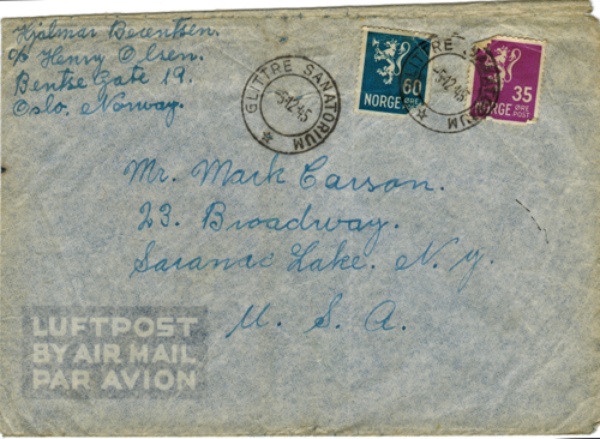 Hjalmar Berentsen envelope. Click on the image to enlarge.