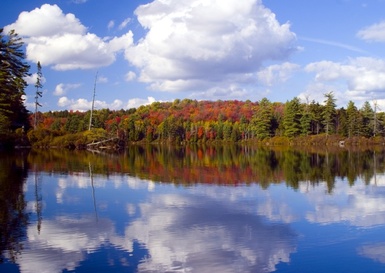 Hoel Pond is a 450-acre pond on the southern edge of the St. Regis Canoe Area. Its eastern shoreline is privately owned.

In 1970, there were 19 public tent platforms on Hoel Pond most of which had docks for motor boats.  A reader adds that some of the families that had tent platforms were the Morrisons, Coons, Clarks, Myatts, Carpenters, and Tates.

Hoel Pond was known for a time as Minnewawa Pond.

A Summer Forest Camp in the Adirondacks 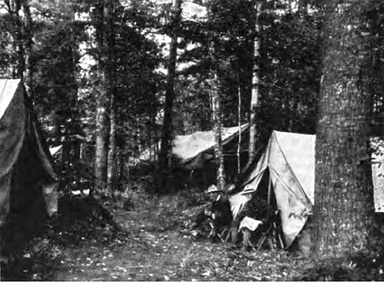 In the August Forest Camp of 1913 on Hoel Pond.
Country Life in America, May, 1914, p, 127Given by The New York State College of Forestry at Syracuse University.

During August of each year The New York State College of Forestry at Syracuse. New York, holds a Camp of instruction in Forestry on Hoel Pond just north of Upper Saranac Lake in the Adirondacks. The Camp is designed especially for owners of estates and for other men interested in the forest and its animal life. The College of Forestry believes that it is carrying out the function of a State institution when it gives such men the right Forestry attitude. Young men who have decided to enter a Forest School will find this Camp something of a repetition. However, for young men who have not yet decided whether they want Forestry, it is believed that this Camp will be especially advantageous in helping them to decide.

The August Camp is in charge of W. A. MacDonald. a graduate Forester, who has had wide experience in the National Guard and in woods work. With him is detailed from the College for the entire month a Forester who will give practical instruction in land and timber measurement and mapping and in woodland protection and management. Especial attention will be paid to methods of cleaning and thinning timberland and such work as is possible in natural and artificial reproduction of the forest. A number of experts will be brought in for a week at a time to give instruction in closely related subjects. Dr. William L. Bray, a well known authority in Forest Botany, will give instruction in the development of the forest as a plant society as well as daily work in the identification of native trees and shrubs. Dr. M. W. Blackman, a Forest Entomologist, will lead the study of the animals and insects of the forest. The beneficial and harmful fungi of the forest will be studied under guidance of Dr. L. H. Pennington. An old guide and trapper of the Adirondacks and a trained Civil Engineer will come in for a time to give instruction in woodcraft and land measurements.

The Camp is a place for practical field instruction and not a Camp of recreation. However, work will close each day at four o'clock and the evening meal will come at seven so that there will be plenty of opportunity for fishing, boating and swimming. More than a half of each day will be given up to tramping in connection with the field instruction. The Camp is splendidly equipped with tents and all that goes to make a tent comfortable and there is a large audience tent for class work. A trained cook is in charge of the mess tent and good, substantial food will be served. The entire cost of the month of instruction including use of tent and equipment and board is $50.00. The Camp is unique in that it is under the direction of the State and it is being carried on as one phase of the general educational work of The New York State College of Forestry.

For information regarding this Summer Camp or professional courses in Forestry, or The State Ranger School in the Adirondacks apply to

Mr. and Mrs. Frank Kendall Jr., of Bristol, Conn., are in their camp at Hoel Pond for a week, together with their daughters, Mary and Jane. They are visiting his mother, Mrs. Frank E. Kendall, of 12 Church street.

Fire on Saturday morning destroyed the camp of Randolph J. Grimes at Hoel Pond. The Saranac Lake Fire Department received the call at approximately 1:30 a.m. and 21 men and two trucks went to the scene. The camp, however, was a mass of flames and the firemen could do little but wet down the ruins of the one-story frame building.

Mr. Grimes told firemen that he awoke to find the fire so advanced that he barely managed to get out of the roaring inferno.

The firemen spent three hours at the scene to insure that the fire was out. Cause of the blaze is not known.

Mrs. Norman Hardy and two sons, of Saudi Arabia, are the guests of Mr. and Mrs. Penn Harvey, of Hoel Pond.

Mr. and Mrs. William A. Harvey of 60 Park Avenue, have moved to their camp at Hoel Pond for the summer.

Charles Vosburgh of Saranac Inn, a holder of extensive waterfront real estate who had petitioned the state for permission to cut a right of way to Hoel Pond and was refused, received word this week that the decision had been declared null and void.

This in effect, reverses the state's stand on the matter and will allow Mr. Vosburgh to cut the right of way and to remove trees, grade and place sand fill along 12 shorefront lots on Hoel Pond.

The acting central permit agent's determination and decision on the issue was originally declared November 24, 1971. Robert S. Drew presently the Acting Central Permit Agent, in his notification to Mr. Vosburgh, stated that the denial was issued in error.

The attorney, representing the Hoel Pond residents, James LaPan of the McCormick and LaPan law firm said that he had not been contacted by the Hoel Pond Owners Assn. on whether to pursue the issue further.

The matter was under the study of the State Department of Environmental Conservation since a public hearing was held at the Harrietstown Town Hall early in 1971.

When the referee issued the decision to prohibit the land agent from cutting a right of way, it was based on the premise that the project as presented was unreasonable and would cause unnecessary and uncontrolled damage to the fisheries resources and water quality of Hoel Pond.

The denial was prefaced with the state's opinion that Mr. Vosburgh should be allowed to re-apply for a revised project that might be in the public interest and would not adversely affect the natural resources of Hoel Pond. Mr. Vosburgh did re-apply through his attorney, James Murray of Tupper Lake, in anticipation of legal action through the state supreme court.

A strong group of objectors to the Vosburgh plan had appeared at a public meeting both in February and in June of 1971. Their arguments were designed to stall Mr. Vosburgh's proposal to grant access rights to parties not owning land on Hoel Pond enabling them to launch boats at a common point at the south end of Back Bay.

Approximately 80 per cent of Hoel Pond is owned by the state of New York and is undeveloped. There are about 30 camps on the privately owned portion.

1. A letter to the editor by May E. Wood, Camp Tanglebirch. Adirondack Daily Enterprise, Septemter 4, 1970