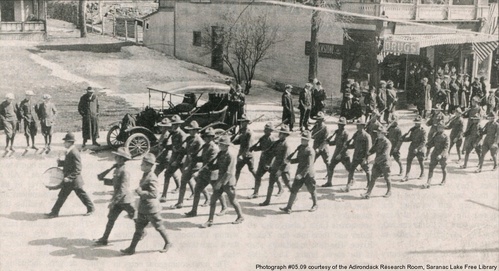 World War I Parade, 1918, Main Street. Part of the Linwood Cottage shows at left, rear; the Drugs sign is at the site of Hogan's, (later Charlie Green's Market, presently the home of the Adirondack Artists Guild). Adirondack Daily Enterprise, May 28, 2005. Hogan's Pharmacy

(Editor's Note: The following came In the form of a letter from Dr. John N. Hayes of Saranac Lake. After he had made some notes and shown them to several long-time residents he was persuaded that the story told had general interest to Enterprise readers. We agree and thank Dr. Hayes for sending them to us.)

I recently had the opportunity of looking into the account book of Mr. John R. Hogan, Pharmacist, at a time when his pharmacy was on Main Street opposite the old Riverside Inn. This account book extends from February 26, 1894 to September 29, 1894. I have no means of knowing whether the items are the total daily sales or only charged accounts. It is probable that these items are only the credit accounts because relatively few of the prescriptions are itemized (eg) Prescription 3 was filled on March 5, 1894; No. 62 on April 30, 1894 and No. 239 on Sept. 5 1894.

The daily total intake ranged from 3 to $8 in the slow month of February; up to $28 to $34 a day in July and August. Prescriptions were filled for Doctors Wicker, Russell and E. L. Trudeau.

I recognized old favorites such as Carter's Little Liver Pills for $.20; Huyler's Candy for $.40. It must have been a visitor who bought the Spruce Gum for $.10 because the natives would get his gum from the nearest tree (this is excellent for sore throat and cough.)

I looked through this old account book with affectionate memories of John, the Old Grafter (and this is true. In his back yard behind his store, he had an apple tree which bore eight varieties of apples — all grafted by him.)

In 1920 I sent my first prescription for him to fill.