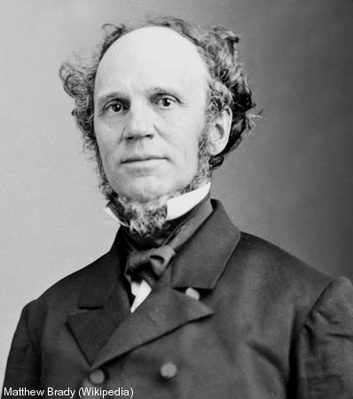 Governor Horatio Seymour was an American politician elected the 18th governor of New York State for two terms, from 1853-1854 and again from 1863-1864. He was the Democratic nominee who ran unsuccessfully for president against Ulysses S. Grant in 1868. He is remembered in the Adirondacks for escorting Lady Amelia Murray, a lady-in-waiting to Queen Victoria, in her unprecedented trip — the first for a woman — to "cross the woods" in 1856, a trip on which they were guided by Mart Moody and James McClelland. They were among the earliest guests in Milote Baker's hotel, built in 1854. Mary E. McClelland wrote in her memoir that they were accompanied by "another lady and gentleman," but they were not named.