It was built about 1918 by Charles J. Riley, and later purchased by Willard S. Smith.  It was on the east side of the the Gabriels-Onchiota Road near its intersection with the present-day New York Route 86.

It was originally the site of the Robear (or Robare) House, owned by guide Zeb Robear.

HOTEL AT GABRIELS DESTROYED BY FIRE 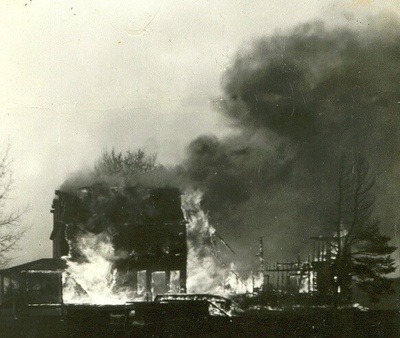 The Hotel Riley burns, 1941
Courtesy of LuAnne Keith RileyFire of unknown origin destroyed Hotel Riley at Gabriels in the early morning of October 22nd, resulting in a loss of $25,000. The hotel was owned by former Supervisor Charles J. Riley and was a three-story structure with about 40 rooms. It was built 23 years ago at a cost of $40,000 and during its hey-day was one of the famous year-round resorts in the Adirondacks. In 1924 when President Calvin Coolidge spent the summer in camp near there, the hotel was the stopping place for many of the president's official family, famous newspaper reporters and others. The president himself called at the hotel on a few occasions.

No one was in the hotel when the blaze which originated in the ice house and quickly enveloped the whole structure was discovered. Little of the furniture and equipment was saved.

Bertram Shephard, 53, manager of the Riley hotel at Gabriels, committed suicide by sending a bullet into his right temple last Thursday morning as he lay in his bed. He died three hours later.

Mr. Shephard who is said to have committed his rash act because of despondency and worry over financial troubles, ended his life with an automatic. His wife, in another room, heard the shot and rushed to his bedside and saw that he was mortally wounded. She aroused others in the hotel and Dr. Seymore Evans, physician at Rainbow sanitarium, was called. Although the doctor did what he could for the wounded man the spark of life died out at 4:15 o'clock. After ascertaining the facts Dr. Evans, acting on instructions from the coroner, rendered a verdict of death by suicide.

Troopers M. J. Thaler and F. Kohl, of Troop B, made an investigation and the former also said that the hotel man died from a bullet wound self inflicted. Trooper Thaler also said that Mr. Shephard undoubtedly took his own life because of despondency over financial troubles which had worried him a great deal of late.

Mr. Shephard leased the Riley hotel last June and had managed it since that time. He was well liked in the community. He appeared in his usual good spirits Wednesday and retired at 11 o'clock. It was shortly after 1 o'clock when- his wife heard the report of a pistol shot and rushing into his bedroom found her husband's face covered with blood and an automatic revolver clutched in his hand.

Besides his wife the deceased is survived by one son.