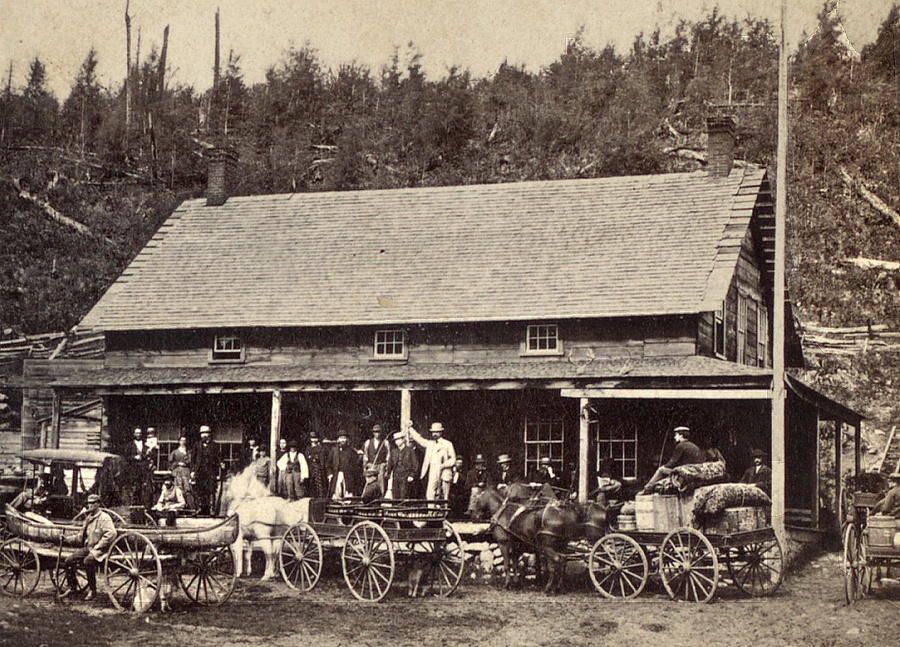 Webber Club (see September 24, 1868 news item) at Hunters' Home, 1865
The area behind the hotel may show the effects of the Great Windfall of 1845.
New York Public Library 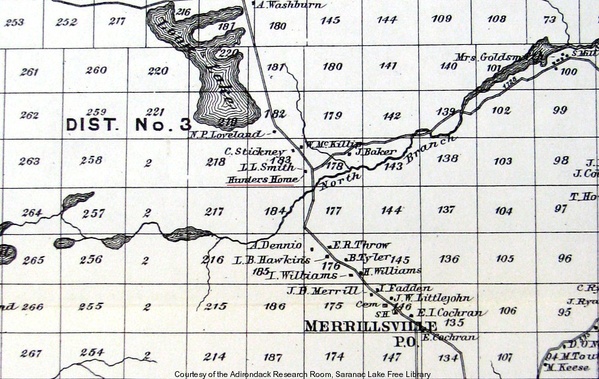 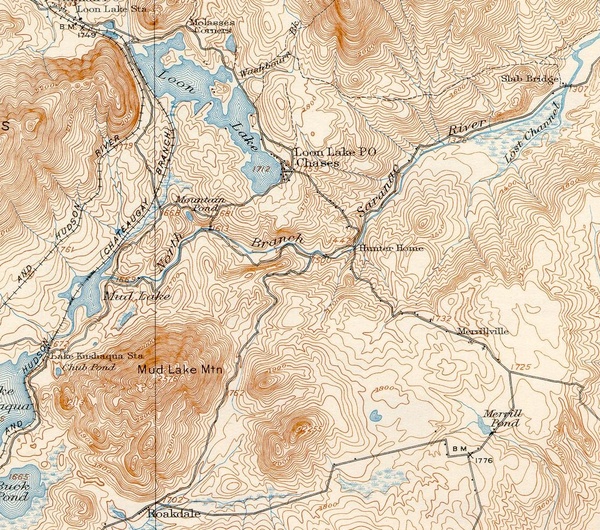 Hunters' Home, center right, on the 1908 USGS Loon Lake map. Hunters' Home was a primitive hotel on the north branch of the Saranac River near Loon Lake. While most accounts hold that Paul Smith built it, about 1852, contemporary James Wardner says that it was built about 1848 by Smith's father for Paul Smith's elder brother, Seth, to run with Paul's help, and that the two brothers did not get along. 1 Edwin R. Wallace, writing in 1878, says that it was being run by Paul Smith's brother, Lewis. 2

By all accounts it was a simple affair— Alfred L. Donaldson writes

It was very primitive. It consisted of one large living room and kitchen, with eight or ten thinly partitioned sleeping quarters overhead. No provision was made for ladies. It was strictly a man's retreat, but its patronage was select—largely doctors and lawyers with high standing in their home cities. They maintained a certain brotherhood reserve about the delights of their wilderness lodge; but word was passed along to the elect, and novitiates were never wanting. The enterprise prospered from the first.

Board and lodging was $1.25 per day; but it cost $2.00 a day to hire a guide. There was, of course, a bar on the premises, and it was run on the pay-as-you-enter principle. In one corner of the living-room stood a barrel of rye whisky. Fastened to it by a stout string was a tin dipper. The price of a drink was four cents—probably because nickels were not in general use at the time,—and the consumer thereby saved a penny. To get a drink you placed four coppers on top of the barrel, and removed the spigot from near the bottom. That the bar paid under these conditions argues extreme moderation somewhere—either in the guests or in the whisky. 3

The Webber Club—a party of eight gentlemen from Boston—who have been spending, a couple of weeks in the vicinity of Round Pond [Lake Kushaqua], near Hunters' Home, passed through this village on their way home last Tuesday. They appeared to have had a jolly good time and were feeling gay enough. They brought out of the woods four splendid antlers, that sometime belonged to as many noble bucks. We suppose they came by them honestly enough. They called upon FERRIS & HAWLEY and had the group with their trophies and hunting gear, photographed before leaving town. They are all "Black Republican," Grant and Colfax men, and go home to help roll up 100,000 majority in the old Bay State, for the "coming man."

…From the Goldsmith place we followed the road which runs up near the river four miles to the hotel known as HUNTERS' HOME, which marks the end of the travelled road in that direction, and also the point where the Port Kent and Hopkinton Turnpike crosses.  Hunters' Home is a sportsman's paradise. The river comes rippling past the very door, and for three miles above falling just about rapidly enough to make first class fly-fishing. This point very nearly marks the dividing line between the outer edge of the great Adirondack plateau, and the valley below. In following up the stream the valley has been gradually growing narrower and narrower, and now at Hunters' Home we find ourselves at the bottom of a deep gorge, the river banks rising high on either hand at a sharp angle. The Port Kent and Hopkinton Turnpike crosses this gorge here at nearly right angles, and by that road we climbed up the steep west bank one mile to LOON LAKE…


Reference has been made to a possible new route from the Dannemora and Chateaugay Railroad to Paul Smith's. An Important link of this new route lies between Wardner's Rainbow Lake and Hunter's Home, nine miles north. From Hunter's Home there is already good road in the direction of Plattsburgh past Goldsmith's and Clayburgh. It is also proposed to shorten the distance more than half Wardner's and Smith's. The route of nine miles between Wardner's and Hunter's Home lies over an old abandoned road, made twenty-five or more years ago by Commissioner Ahaz Hayes, over which to draw lumber from Keese's mills to Plattsburgh. This great business project was in the interest of Keese & Tomlinson, of Keeseville, and large quantities of lumber were hauled over the route, but the cost of transportation ate up the profits, and both project and road were abandoned. To re-open the road would not therefore incur great expense.