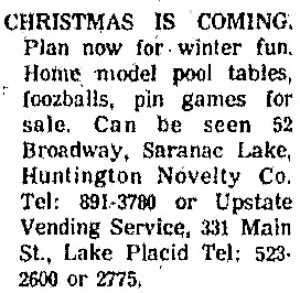 Adirondack Daily Enterprise, November 15,1978 The Huntington Novelty Company handled juke boxes and pinball machines. It was started by Ralph P. Huntington at 4 Academy Street; he operated it for fifty years. It was later purchased by N. Thomas Oddy.

Carl LaDue worked as a vending machine mechanic for Huntington Novelty for forty years, retiring in 1977.

Missing: one juke box! Members of the Teens Canteen would be overjoyed to see this automatic record player back in the Harrietstown town hall.

Through a misunderstanding, the recording machine left the premises of the Canteen meeting place following the rummage sale on Saturday.

The story begins on Friday when members of the committee conducting the annual rummage sale for the benefit of the Saranac Lake General hospital received many donations of furniture from village residents.

The furniture department of the sale was placed in the corner of the auditorium surrounding the music player. On Saturday, after much of the home furnishings had been sold, a prospective buyer spotted the juke box.

Believing that the recorder was also for sale, a worker sold it to an unknown buyer. Through this accident, the Teens Canteen has suffered another in a succession of disappointments.

The missing juke box bears a trade name of Rockola and has a walnut stained cabinet. It plays 12 records automatically. The machine is owned by Ralph P. Huntington of the Huntington Novelty company, 4 Academy street.

The owner loaned the recorder to the Canteen and his company services it and changes the records which enables the young people to dance to the most up-to-date music The Canteen has had the machine for about three years.

In order to change the records, the new owner must have a key to open the machine. Thus, all local key makers have been notified in the hopes of locating the unsuspected new possessor of the box and remedying an unusual mistake.

If the person who purchased the machine would notify Mrs. Leo McKillip or Mr. Huntington, the teen-agers might again be able to have dance music for their weekly jam sessions.