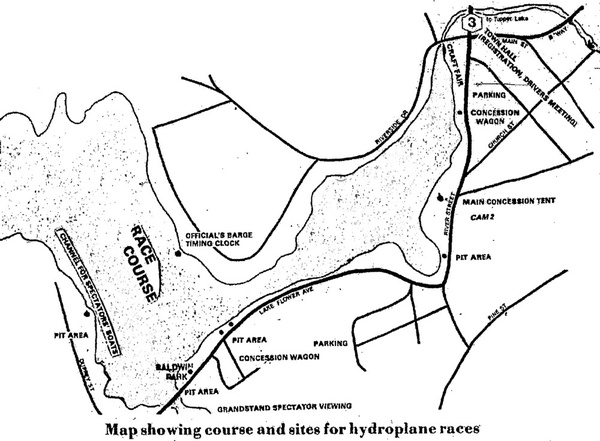 There was a proposal to hold smaller hydroplane races on Lake Colby in 2001, but they were cancelled as a result of protests by shore owners and the Adirondack Medical Center.

SARANAC LAKE — About 750 boats from 48 states are expected here for the 1978 Stock National Outboard Hydroplane Championships, beginning Tuesday, August 8, and ending with the Finals on Sunday.

Drivers competing in 19 separate classes will take their sleek racing machines through the elimination process all next week. Action each day on Lake Flower begins at 9 a.m. and concludes at 7 p.m. Forty heats per day are expected. The final field will be decided by Friday. Drivers are vying for 11 berths in each class. The defending champion is guaranteed an automatic berth.

The championship competitions in the 19-class event are scheduled for next Saturday and Sunday, with Sunday's races beginning at noon.

The 1978 Hydroplane Championships, which is expected to attract about 4,000 people to Tri-Lakes area, is sponsored by the Franklin County Sports Council, Village of Saranac Lake, Town of Harriestown and Can-Am 2 Racing Gasoline.