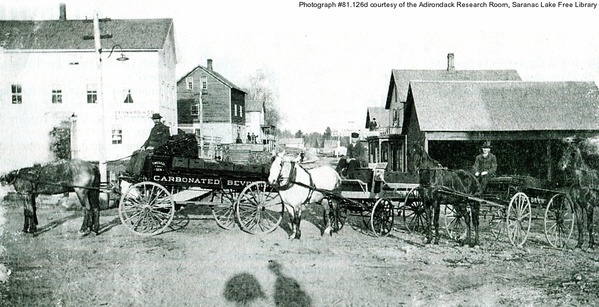 Looking east from the corner of River Street and St. Bernard street, a spot that may have once been known as Riverside Square, this photo includes a shadow portrait of the photographer, believed to be George W. Baldwin, in the afternoon light. The "carbonated beverage" wagon heading up St. Bernard Street is the conveyance of I. Merkel and Sons, a Plattsburgh bottling outfit that had apparently bought the Adirondack Bottling Works by 1896. The white building on the left houses Leonard & Co., clothing purveyors; they later moved to Main Street above Berkeley Square. Right foreground is a shed, and beyond it is the store of Henry West, Boots & Shoes. The location is confirmed by the 1895 Sanborn map, but the photo could have been taken as early as 1885, when the businesses were advertised in the Enterprise at these locations. Barbara Parnass made the print for the library from Baldwin's glass plate negative. Adirondack Daily Enterprise, October 6, 2012 Born:

Isaac Merkel came to Plattsburgh from Germany c. 1866 and founded I. Merkel and Sons, a retail and wholesale tobacco and alcohol business on Margaret Street, later moved to Bridge Street. The business appears to have owned the Adirondack Bottling Works in 1896.

One of his sons, Joseph Merkel, moved from Saranac Lake to Allentown Pennsylvania in 1902.  He had been involved in an attempt to develop a gold mine on Mount Pisgah in 1900.

Mr. Merkel was born in Frankfort-on-Main Germany, and came to Plattsburgh when a young man fifty-three years ago. He was for a time a commercial traveller and afterwards went into business of manufacturing cigars and dealing in beverages.

He was for many years located on Margaret street, opposite Custom House Park. From there he moved to Bridge street, where he also conducted a large rectifying plant and bottling establishment. He also dealt in spring water and carbonated drinks conducting the largest establishment of the kind in Northern New York. In all Mr. Merkel had been in business in this city fifty-two years, starting in 1867. For a time his brother-in-law, L. Kahner, now of New York City, was his partner in business here under the firm name of Merkel & Kahner, in the manufacture of cigars.

Mr. Merkel married in this city. Miss Jeannette Kahner, who like himself, came from Frankfort, Germany. Mrs. Merkel died about seven years ago. Surviving Mr. Merkel are three sons and one daughter. Joseph Merkel of Allentown, Pa., Abraham Merkel of Albany, N. Y., David Merkel and Mrs. Henry Schier of Plattsburgh. Mr. Merkel was a member of Clinton Lodge, No. 15 5, F. & A. M., of which he was treasurer for upwards of twenty-five years, and of Plattsburgh Chapter, No. 39, R. A. M. He was also for a number of years president of Joel Lodge, No. 118, I. O. B., of Beth Israel congregation. He only retired as president of this society a few years ago on account of failing health.

Body of David Merkel Sr. To Arrive in Plattsburgh Friday for Funeral Rites

Isaac Merkel, one of the pioneers of Plattsburgh, was a well known and respected citizen and was the head of the firm, Isaac Merkel and Sons, rectifiers, wholesale liquor dealers and tobacco distributors from 1868-1919.

Our Town By EDDIE VOGT]

Thanks to Mrs. Dudley Turner for part of an Enterprise of June 1896…

But what makes it particularly interesting is that it has an ad of the Adirondack Bottling Works, I Merkel and Son, Props., bottlers of Beadleston and Woerz and Barters Lager Beers. And Ambrose McKillip was telling, me just the other day that he drove a truck for them at one time.