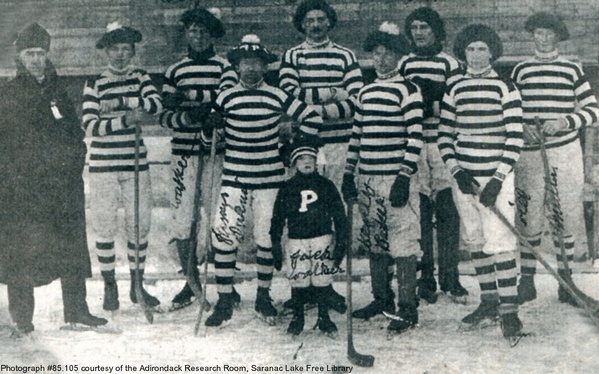 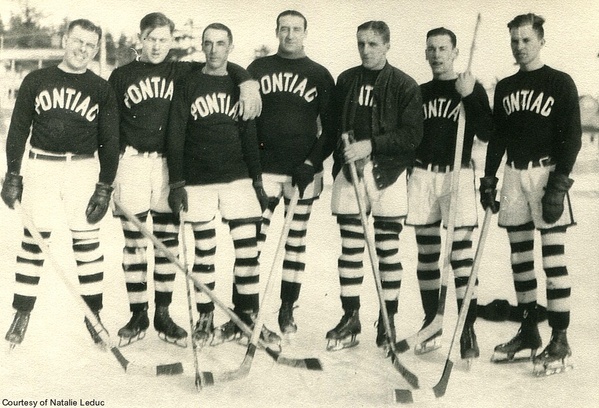 Ice Hockey in North America dates to the early 1800s; similar games played on fields instead of ice go back thousands of years. In the Saranac Lake region, we find no mention in area newspapers before the late 1890s, generally in connection with the Winter Carnival.

The winter carnival of the Pontiac Club which will be held at Saranac Lake January 30th, 31st and Feb. 1st, will present many attractive features. John Neilson, the champion speedy and aerobatic skater and Miss Minnie Cummings, a noted fancy and figure skater will be in attendance and give several exhibitions. There will be exciting hockey matches, skating races, fancy skating, masquerade skating, coasting, toboganning, snowshoeing, grand parade of sleighs and floats, storming the ice palace, etc. Three days of healthy and enjoyable sport. The New York Central will sell excursion tickets from stations on the Adirondack division, also from Huntingdon, Valley field and Montreal to Saranac Lake and return at low rates, tickets good going January 29th. 30th, 31st or Feb. 1st, returning on or before February 5th. Special low rates will be made from Malone, Montreal and other principal stations or the Northern portion of the Adirondack division for tickets good going Feb. 1st. resuming the same day or on the morning train of Feb. 2nd. Full particulars may be had from N. Y. Central agents.

Red and White Glory Began Back in 1909

[This is the caption to a lost photograph: REMEMBER HOW GREAT? — Saranac Lake High School hockey team which won five games and lost none in 1909, and was scored on only once. Front row from the left, Jay Stickney, Arthur Fortune, Phelps Harding, Andrew Callanan and Clayton Hoyle. Upper row, Seaver Rice Fred Finnegan and Harry Hallock. Phelps Harding later starred at Cornell. Stickney, Callanan and Fortune are deceased.]

Back in 1909 a high school field house was something unheard of in athletics and the teams that represented their schools had to outfit themselves. They also had to assume the expenses and responsibilities of travelling to other schools to compete.

Seaver Rice, who was a member of those epic early century teams fielded by the Red and White, says it taught them good business management, Seaver, who is well along in years, still keeps his memory fresh with incidents and happenings of the old school days... 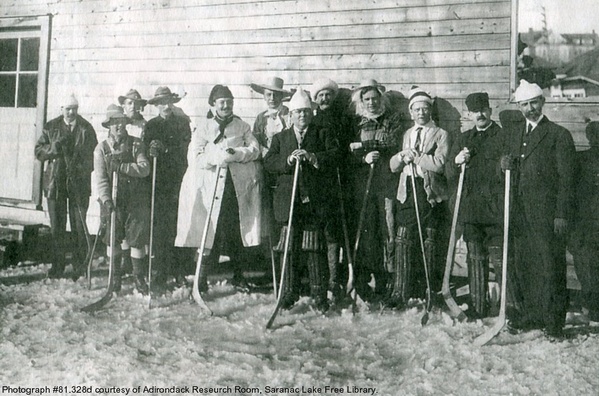 A group of players, some in costume, line up against a wall to be photographed for posterity. Their names were not recorded. A reader has identified the player third from right as village clerk, Albert H. Breier. Does the slush at their feet — and the spring light — indicate that the season is almost over? If you can identify any of the other participants, please use the Comment box below. Adirondack Daily Enterprise, March 2, 2013 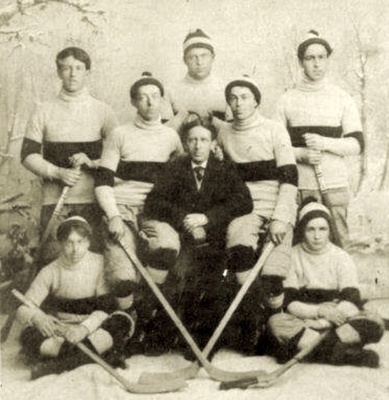 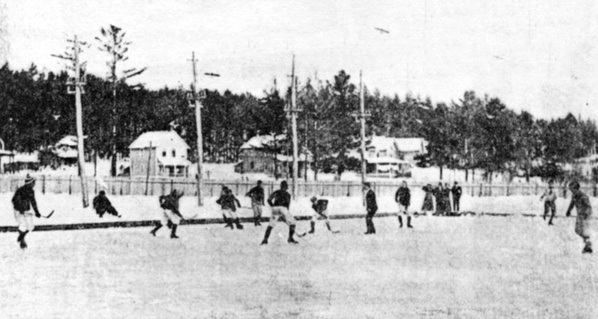 A game in progress, undated. From a section titled Pictures from the Past in the 1957 Winter Carnival brochure, courtesy of Natalie Leduc