The first Ice Palace was built as part of Winter Carnival in 1898.  The first palaces were built on the shore of Lake Flower near the present day boat launch.  In 1909 through 1913 and 1920, the palaces were built atop Slater Hill, later the site of the first Saranac Lake General Hospital, and later still North Country Community College; a horse-driven escalator was built to drag the blocks up the slope to this dramatic and lofty site. 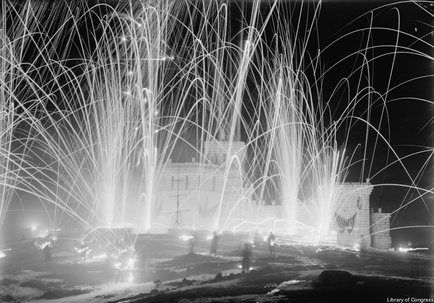 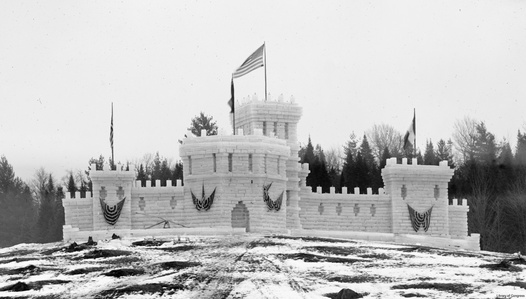 M. C. MEAGHER, of Saranac Lake, has been given the "contract to erect the ice palace for the carnival to be held in that village Jan. 29-31. The palace is to be an elaborate affair, 135 feet in length, with a main tower 60 feet in heighth. Two other smaller towers are to be erected and the walls of the palace will be about 30 feet in height. It will be lighted throughout by electricity. The carnival, it is claimed, will be the finest ever held at Saranac Lake.

SARANAC LAKE'S PUBLIC SPIRIT STEPS IN TO SAVE ICE PALACE

When the Chamber of Commerce announced that there would be no ice palace for this year's winter carnival, the public spirited citizens of Saranac Lake were overlooked.

Howard Ellithorpe, Peter LeMay and Glenn Corl decided Saranac Lake would have an ice palace and without further ado proceeded to hand-shovel an ice patch on the shores of Lake Flower at Prescott Park.

No sooner had the men started work than people stopped to inquire, "what are you doing?" Informed of the men's intention, the next question invariably was, "Who is paying you, and how much?" The inquisitive people were told, "No one is getting paid, this is strictly volunteer." And most who stopped and learned of the men's efforts then volunteered themselves. As a result, the carnival will again have an ice palace.

In the recent past, it was a general misconception that the ice palaces were built entirely by volunteers. This was not true, of course, because the Chamber of Commerce was paying $500 to the person who "volunteered" to supervise construction of the palace. Other than this $500 fee paid to one man, the labor on previous palaces was volunteer. Last year, however, when the first palace thawed and a second one had to be built, the total cost was near $1,500.

Architect William Distin, Sr., has drawn plans for the palace without charge, as he has done in the past. It will have three towers with a 60-foot front facing River Street and ice-blocks angled back at each end of the structure for a more finished look. As usual the structure will be in Prescott Park.

The center tower will be approximately 30 feet high with a parapet at the top and a recessed door at the bottom. The end towers will be about 15 feet high. Flags will fly from each tower.

The ice blocks are 2 x 4 feet. Arrangements have been made for a mounted boom to lift the blocks and the Village-owned ice saw will be used for cutting the blocks. Mr. Ellithorpe said the volunteer response has been tremendous already but that they can use all the help they can possibly get for the great amount of work involved. Some men will be working days and nearly every night now, so volunteers can come at their convenience. 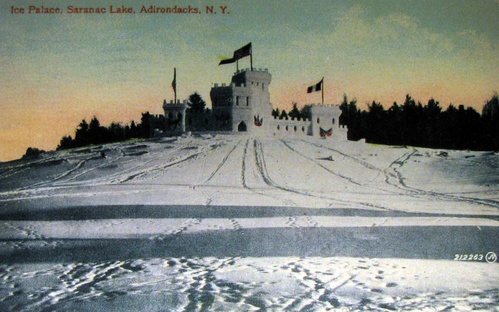 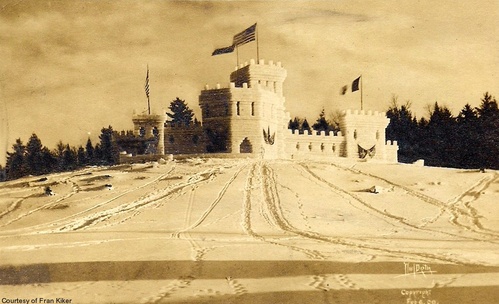 Ice Palace, original photo by William L. Distin,
from a scrapbook of Mrs. W.A. Myatt, mother of James and Ernest Myatt.
It appears to be the same photograph as the hand-tinted post card at left. 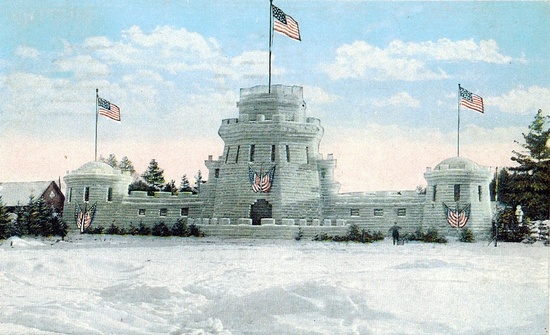 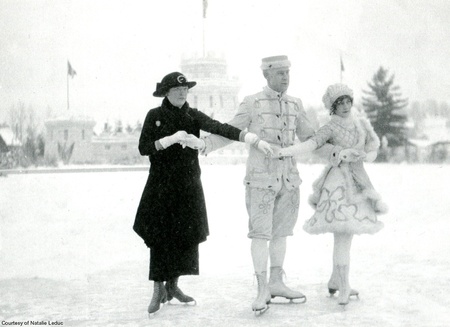 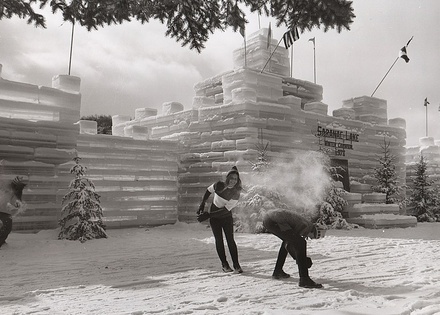 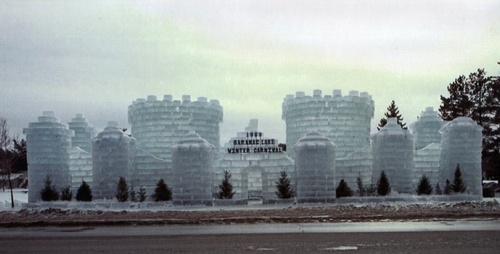 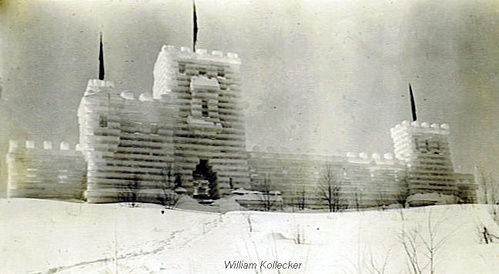 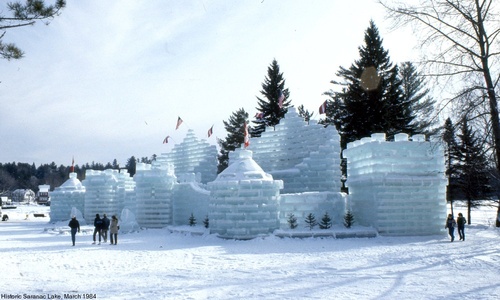 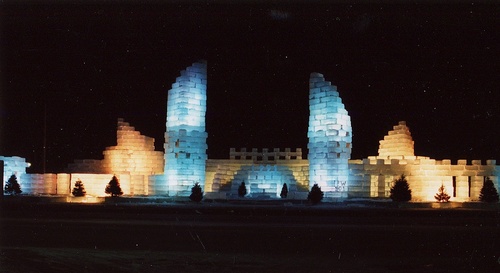 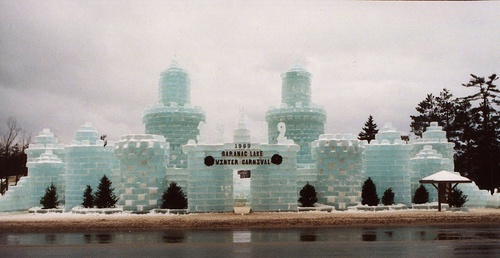 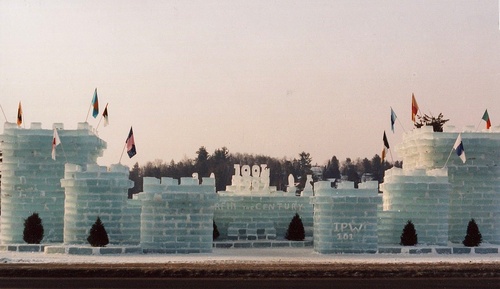 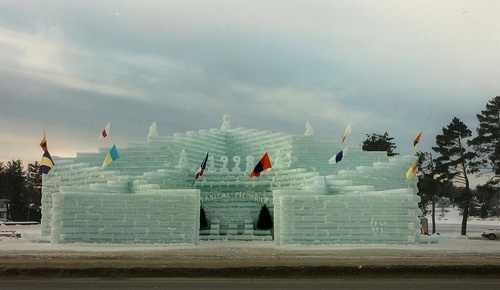 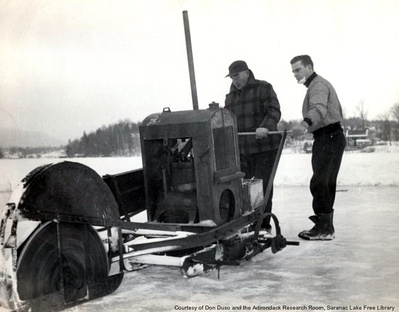 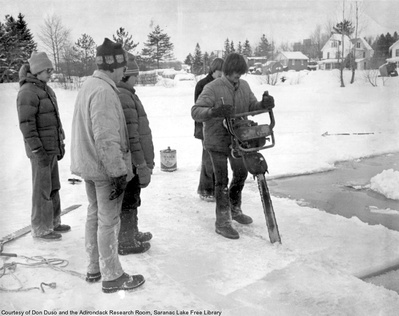 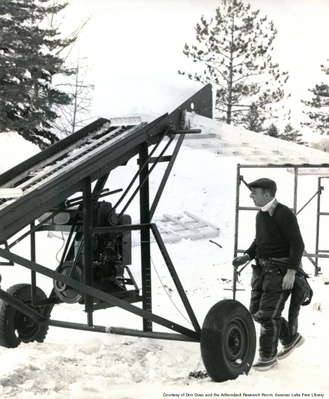 The Library of Congress also captions these photos as have been taken at Upper Saranac Lake, N.Y., which is clearly wrong. The Ice Palace we have labeled as 1915, the Adk Museum has dated as "between 1915 and 1945" and the LoC 1909 photo, they have as "between 1915 and 1930."
Cataloging errors happen. -- Marc Wanner