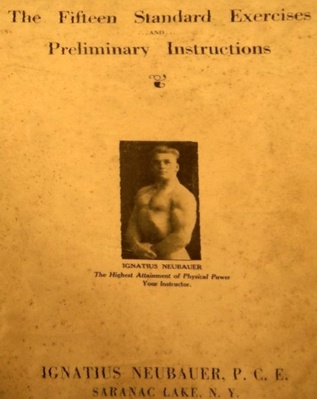 Undated, unidentified clipping in a scrapbook at the Saranac Lake Veteran's Club.Born: June 17, 1896

Dr. Ignatius J. Neubauer was a chiropractor and a World War I veteran. He was a son of Charles Neubauer. He taught physical education at Saranac Lake High School for seven years. He was the last owner of the Guild House at 100 Main Street before it was torn down to build a major extension to the Saranac Lake Free Library.

REED WINS IN SIX ROUND BOUT WITH FRANKIE KEARNS

Pal Reed, Saranac middleweight, won from Frankie Kearns of Utica in their six-round bout in Syracuse Friday night. Reed has been under the management of Ignatius Newbauer and has been making Saranac Lake his training headquarters.

Ignatius J. Newbauer, of Saranac Lake, is one of 665 chiropracters in the state who have been issued licenses to practice by the Department of Education.

Dr. Neubauer had taught physical education at Saranac Lake High School for seven years and served in the United States Navy in World War I as an aide to Admiral Benson. He was also physical director at the Naval Station at Pelham Bay.

He was born June 17, 1896 in Albany, a son of Charles A. and Catherine Berhaupt Nuebauer. He attended Saranac Lake High School and was a graduate of a course in physical education at Harvard University. He was also a graduate of the New York Institute of chiropractic.

He was a member of the Elks Club, the Fourth Degree Knights of Columbus and American Legion Post 447. He was a retired National Guard colonel.

Survivors include his wife, the former Eleanor Foster whom he married Jan. 8, 1921 in St. Bernard's Church with the late Father Walters performing the ceremony. Also surviving are a son, John, of North Bergen, N.J.; a daughter, Mrs. Louis (Patricia) Kelly of Utica; and five grandchildren.

Friends may call at the Fortune Funeral Home. A veterans' service will be held there at 7 p.m. and a Fourth Degree Knights of Columbus Rosary service at 8 o'clock. A Roman Catholic funeral mass will be offered at 9 a.m. Friday at the Methodist Church. Interment will be at 2 p.m. at Our Lady, Help of Christians Cemetery in Albany.

External link: An obituary of his son, Ignatius John Neubauer