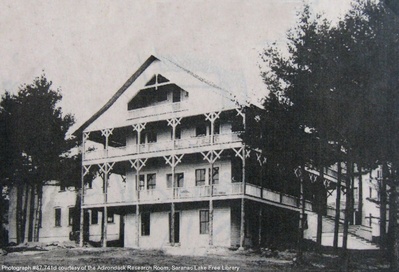 The Hiawatha House at the Stony Creek Ponds south end of the portage at the Indian Carry. Adirondack Daily Enterprise, October 23, 1999 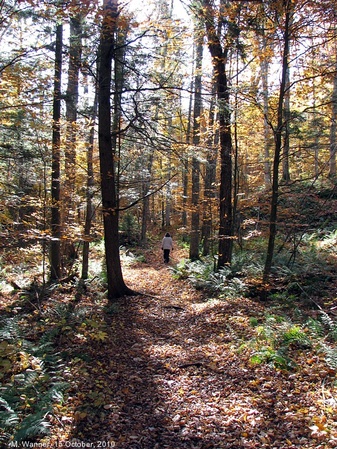 Walking the Indian Carry The Indian Carry is a portage trail that leads from the southern end Upper Saranac Lake to the Stony Creek Ponds, and thence to the Raquette River. It dates to the pre-history of the Adirondacks, and is still in use by people on canoe camping trips; it is part of the Northern Forest Canoe Trail.

It was a part of the 90-mile Adirondack Canoe Classic canoe race until it was re-routed to avoid crossing New York Route 3.

John Dukett, who lives on the Indian Carry, between the Upper Saranac and Stony Creek Pond, recently unearthed some interesting Indian relics of ages long since gone by. He was at work near the; base of a mound near there on Saturday, May 17, when the ground broke under his feet, and his little son called his attention to the fact that there was something in the hole his heel had made. He examined it and excavated two vessels of curious shape. They were fifteen or eighteen inches high-larger toward the middle than at the bottom, then smaller, and again flaring toward the top. They were oval shaped at the bottom, so that they would not stand alone, and their sides were covered with carving. He also found a large number of arrow heads, some stone tomahawks and stone hammers,' and two instruments which very much resemble our modern carpenter's gouge. One of them is now the property of Mrs. H. A. Taylor, of this village. Dukett has refused an offer of $50 for the collection. He says that he has not yet examined the larger part of the mound, but means to do so soon. He also says that in plowing in that vicinity he has often plowed up human bones, and that they are the remains of a race of much larger proportions than that of to-day. "There were giants in those days."—Malone Palladium.

"OLD GUIDES AND CANOEISTS of the Adirondacks are not pleased with the closing of the old Indian Carry, from the head of Upper Saranac Lake to the Raquette River, used by the Indians as a carry long before the first white man set foot In these woods, and which guides and boatmen have come to regard as public domain. Rustic Lodge stood at the Saranac end of the trail. The boathouse has been torn down and the laundry and grocery are being razed to the ground. The main building will soon follow. On this site there once stood an ancient Indian village. The Corey family made Rustic Lodge famous many years ago, and more recently Charles H. Wardner operated it for 17 years. The Messrs Swenson of New York, who acquired the property some years ago, have built a new road around it, terminating at a new dock to divert traffic from the Rustic dock. The landing place is too shallow to please those who use launches, and the road is longer than the old one and has not been used by canoeists. A barrier has recently been built, however, across the ancient carry road".

There is considerable interest hereabouts as to whether an attempt will be made to close the old Indian Carry Road at Rustic Lodge this summer.  Last fall two gates were built across the road but some party or parties unknown had a very decided opinion that the old road should be kept open and ripped one gate from its hinges and laid it flat.  Many of the guides say that an old carry like this one cannot be closed by private parties buying adjoining lands.

Barrier Is Built at Upper Saranac End of the Portage.

Landing Used by Canoeists and Guides With Parties of Today and the Indians Before Them Is Blocked-- Indications Are That a Once Popular and Much Beloved Spot Will Be Closed Against the Tourist Public.

From present indications Rustic Lodge, one of the beat known land marks of the Adirondacks will soon disappear. The boat house where the all canoeists making the Indian Carry landed, has been torn down. The laundry building and the “grocery," which will be remembered by many people who have refreshed themselves there, are also being demolished and the main building will presumably be razed in the near future.

Rustic Lodge stands at the Upper Saranac end of the ancient Indian Carry, so named because the Indians carried across there from Upper Saranac Lake to the Raquette River long before white men set foot in the Adirondacks. Upper Saranac Lake ultimately drains to Lake Champlain and the Raquette River flows to the St. Lawrence. Indian Carry marks the divide between these two vast watersheds. There are still old settlers who recall the traces of circular mounds of earth that marked the site of the Indian village that stood at Rustic Lodge. Over this spot also hovers the tradition of the great Indian giant of the Upper Saranac, which has been printed in times past in The Adirondack Enterprise. The imprint in the rock of the giant footsteps and his seat are still shown to tourists.

Rustic Lodge was the home of the Corey family, who were pioneers on the Upper Saranac. It was solidly built of squared logs, chinked with plaster after the fashion of the early days, and was the Corey homestead for many years. It was conducted as a hotel for about 17 years by Charles R. Wardner, whose good management and agreeable personality made it one of the best known places in the Adirondacks. Wardner vacated in April last when he purchased the Lake Clear Inn at Lake Clear.

Rustic Lodge and considerable adjacent land was acquired some years ago by E. P. and S. A. Swenson of New York. Messrs. Swenson built a new road around the Rustic property, terminating in a new dock on the lake to divert traffic from the Rustic dock. Last summer the mail steamer Saranac started landing at the new dock, but the water was found to be too shallow and she had to resort to the old Rustic dock. Owing to the wet season the lake level was unusually high all summer. In a dry season there would probably be insufficient water to float ordinary launches at the new public dock, although it is splendidly built. The road from the new dock is longer than the old carry road and was not used by canoeists last summer.

Although the Rustic property is privately owned it was not believed that the ancient carry road would ever be closed. A barrier has recently been built across it, however, and it will be a source of regret to many if the carry traffic is stopped. Already there are murmurs of disapproval heard among the guides. The esteem in which they held Rustic Lodge amounted to real affection and they have always regarded the ancient Indian Carry as public domain. 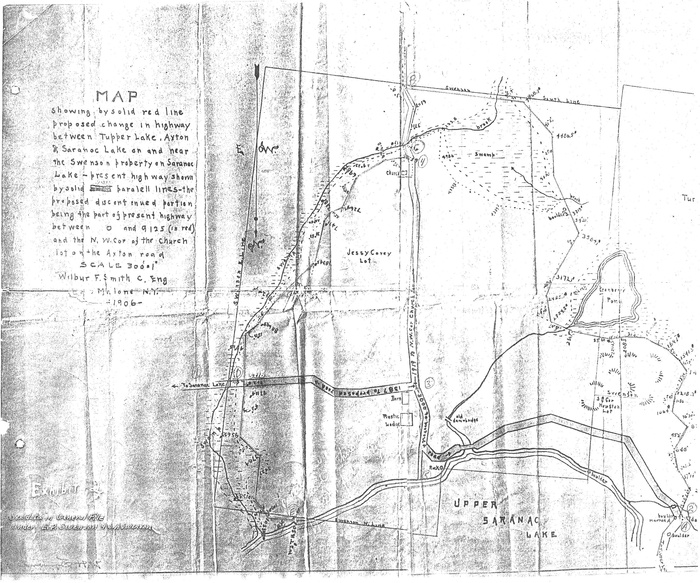 This map shows a proposed reconfiguration of town highways in the Rustic Lodge area made by owners E..P. and S.A. Swenson in 1906.
Note: North is toward the bottom of the map.
The Town of Harrietstown accepted the highway reconfiguration proposal and the Swensons eventually built the loop shown on the map.
The east-west portion of the town highway near the lake shore was abandoned, and the north-south portion leading to Axton (now Coreys) was also abandoned as far south as the Indian Carry Chapel property.   So the northern end of the ancient Indian Carry was closed by the Swensons.
This highway reconfiguration resulted in the unrest reported in the preceding newspaper entries that are dated 1912 and 1913.