Irving Edelberg, son of Sam and Mary Edelberg, was known as "Bud." He was a World War II veteran, having served with great distinction and afterward practicing as a well-respected lawyer in Saranac Lake. He served as judge, village trustee and as chairman of the village planning board. For many years his office was in the arcade of the Hotel Saranac. When the hotel was being renovated in the second decade of the new century, changes that Paul Smith's College had made to the arcade were removed, revealing the large window of Bud Edelberg's office with his name still painted on it. The sign was later removed.

Bud's parents owned  the 32 Park Avenue cure cottage and bungalow from about 1908 to 1920. The family home was the Ellwood Wilson Cottage.

He served as trustee of William Kollecker's estate, and donated much of Kollecker's collection of photographs to the Saranac Lake Free Library. 1

SARANAC LAKE - Irving "Bud" Edelberg, 82, of Turtle Cove, Monticello, Ga. and formerly of Saranac Lake, died Saturday, May 24, 1997 after a long illness. He was the son of Samuel and Mary Edelberg. He attended local schools from which he graduated in 1932 and was; a graduate from the University of Michigan Law School in 1940.

He was employed by the United States Department of Justice. He entered the U.S. Army in February 1942 as a private.

He was highly decorated for his war service having won the Silver Star, Bronze Star, Purple Heart, the Presidential Unit Citation, the Belgian Croix de Guerre and the New York Conspicuous Service Medal.

He was a combat tank reconnaissance officer with the U.S. Army's 2nd Armored Division. He experienced combat in North Africa, Sicily, Omaha Beach, France, Belgium, Holland and the Battle of the Bulge.

He was discharged from the service with the rank of captain in March 1946.

He was with the first American troops to enter Berlin. In July 1945, at Maastricht, Holland, he married Alice Boggs, an American Overseas Red Cross worker.

Following the war, he returned to Saranac Lake to practice law for 46 years. He was a local police judge for 22 years.

He is survived by two sons, John and William Edelberg, both of Saranac Lake; a daughter, Susan Donnelly of Lake George; a brother, John Edelberg of Lawrenceville, Ga.; a sister, Myra Fair of Sarasota, Fla.; two grandchildren, a great grandson and several nieces and nephews. His wife died in 1970. 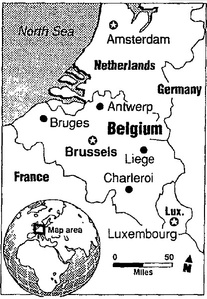 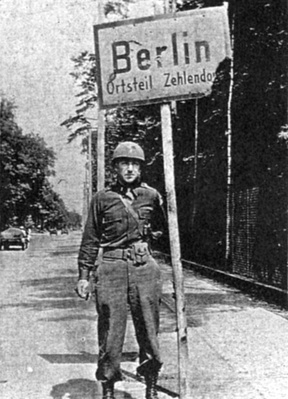 (Editor's Note: Irving M. "Bud" Edelberg is a former longtime Saranac Lake resident now living in Georgia. He offered this remembrance of his World War II service in Europe in commemoration of the 50th anniversary of V-E Day and the Battle of the Bulge. Edelberg is the holder of the Silver Star, the Bronze Star, the Purple Heart, the Belgium Croix de Guerre, and the New York State Conspicuous Service Cross in recognition of his military service.)

In October and November 1944, the Second Armored Division, which had been organized and trained by General George Patton at Fort Benning, had blasted its way through the bunkers and anti-tank obstacles of the Siegfried Line and was slugging its way across muddy beet fields and through German farm towns toward the Ruhr River.

On Nov. 23, we withdrew from combat and moved to the coal mining town of Oidtweiler for rest and maintenance.

On Dec. 16, in a broad and surprise attack, the Germans swept through the American forces in the Belgium Ardennes driving toward Liege, the largest American supply depot, and the port of Antwerp.

At midnight on Dec. 22, we moved out in black-out and freezing sleet and rain some 90 miles south to the vicinity of Ciney, Belgium. All through the night as we proceeded south, we wondered what we were getting into as we passed isolated groups of men, guns and vehicles racing pell-mell to the north.

During the night of Dec. 23, we listened to the German buzz-bombs flying toward Liege, Antwerp and London, and prayed that the engines would not cut out, which meant that the bomb would fall in our vicinity.

At first light on Dec. 24, with the Germans only one or two kilometers on the outskirts, we moved into the small village of Ciney. As our tanks stood in the streets, the townspeople invited us into their homes for coffee and to get warm. I was reconnaissance officer for a tank battalion consisting of some 80 tanks.

Early on Christmas Eve, we moved into a lovely small chateau on the outskirts of Ciney for battalion headquarters. There was a large living room with a huge stone fireplace and a grand piano standing on a plush white carpet. Colorful face masks, shields and spears from the Belgian Congo lined the walls of the broad stairway. During the night, as we studied our maps and battle plans, the old caretaker kept a blazing fire in the fireplace.

At first light on Christmas Day we attacked toward the German occupied towns of Conjoux and Celles. We were in immediate combat. Against heavy opposition one of our task forces drove along a high, open ridge to cut the highway leading to Celles while our other tank force fought into and to annihilate the German forces already in Celles.

In the meantime, with a small recon patrol, I discovered a large farmhouse which appeared to be a German aid station.

Upon entering, we found some 32 wounded German and American soldiers being treated by a German medical captain and two aid men. They went about their business and paid no attention to us. I knew they were of the 9th SS Panzer Division but the captain would tell me nothing.

When I told him they were prisoners of war and I would send American medics and ambulances to evacuate them, the captain took a long draw on his pipe and said, "Ya." The wounded Americans told us they had been captured a few days earlier and the German medics knew that they in turn would soon be captured and had treated them well.

On Christmas night, while reconnoitering for a place for' battalion headquarters, I knocked on the massive wooden door of a large chateau within our combat area on the edge of Conjoux. A second-story window opened and a little grey-haired lady asked something in French.

In English she said, "What ees eet you want?"

I said I wanted room for my men.

I told her officers and soldiers. "Officiers in chateau, soldat in stables." she said.

"No, no. American officers and soldiers in chateau," I replied.

She threw up her hands and said, "Mon Dieu, where, where."

"We will sleep on your floors, chairs, sofas and tables," I told her.

All the time she was saying, "Mon Dieu, mon Dieu."

The Chateau de Villier was our battalion headquarters for three days while our tanks fought toe-to-toe with the German Panther tanks on the frozen lawns and terraces of the Chateau. The chateau belonged to the Count and Countess de Villier. The elderly Count was an uncle of King Albert of Belgium of the First World War.

After the war in July 1945, I returned to the Chateau with my Red Cross wife. The Count and Countess insisted that we sit on the patio and have tea. At one point the Countess said to me, "Capitaine, you weel come wiz me" and led me to a grove of beautiful beech trees. There stood the rusting hulk of one of our Sherman tanks which had been knocked out not 100 yards away on the lawns of the chateau on Dec. 27.

On Jan. 2, 1945, we started our drive toward Bastogne southerly along the Liege-Manhay-Bastogne highway. That morning, in a snowcovered pasture about 50 yards ahead of me, my friend, Capt. Robert E. Lee, former football captain at the University of Arizona, was killed when his tank was struck by a German Panzerfaust. Lee was a direct descendant of Robert E. Lee. In the afternoon we captured several German prisoners. I asked a German officer where they were going.

"To Antwerp and Paris," he replied.

"How are you going to get there?" I said.

"Hitler says we will get there." I told him he had reached the end of the line.

In July 1945, in the town of Celles where we had fought so violently on Christmas Day, the destroyed German Panther and Tiger tanks still stood in the streets and on the edge of town. The town had erected a sign which said, "HERE WAS STOPPED THE FURTHEST PENETRATION OF THE OFFENSIVE OF VON RUNDSTEDT ON DECEMBER 25, 1944."