I.N. Phelps Stokes and his wife Edith Minturn. The John Singer Sargent painting was a wedding gift from a friend of their parents. 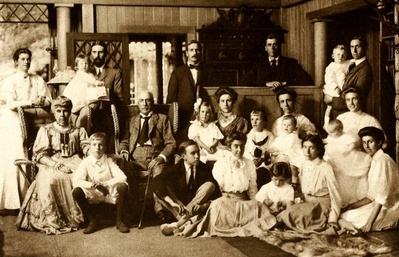 Isaac Newton Phelps Stokes was an American architect, and the eldest son of multimillionaire Anson Phelps Stokes, whose family camped on Birch Island in Upper St. Regis Lake. His family called him Newton. He graduated from Harvard in 1891, and founded an architectural firm, Howells & Stokes with John Mead Howells, in 1897.

I. N. Phelps Stokes designed St. Paul's Chapel at Columbia University and several urban housing projects in New York City. Sanger Hill, a New York State country house in the English manner, represents his private housing work. He was active in housing reform; he was a co-author of the Tenement House Law of 1901, and designer of the University Settlement House. He later became a political ally and then a friend of New York Mayor Fiorello LaGuardia. During the New Deal, as head of the Art Commission, Stokes oversaw the WPA mural program for the City of New York, which sponsored murals at locations including the Marine Air Terminal at LaGuardia Airport, Harlem Hospital, and New York Public Library.

His greatest work was the huge compilation of historical information, maps and drawings in the six volume The Iconography of Manhattan Island. Starting in 1909, the work on the book gradually became all-consuming; the first volume was printed in 1915 and the work was not completed until 1929.

His father, Anson, was very wealthy— he owned 85 acres of Manhattan centered on Murray Hill, which was still rural in the mid-19th century, but by the end of the century would become some forty blocks on the East Side between 34th and 42nd streets. But on Anson's death in 1913, it was found that he was worth far less than had been believed. Newton's work on the Iconography interfered with his work as an architect, and his expenditures on the collection that went into it consumed much of his fortune, so that when the Great Depression came, he found himself in greatly reduced circumstances; the couple sold their Gramercy Park mansion and moved to a modest duplex at 953 Fifth Avenue, that Newton had designed years earlier. After his wife's death, he moved to a three-room apartment, where he lived for another seven years.