Isaiah Vosburgh was a stage driver and livery man who served as president of the village board for nine years between 1908 and 1920. He also served as chief game protector for the area.  He lived at 11 St. Bernard Street. 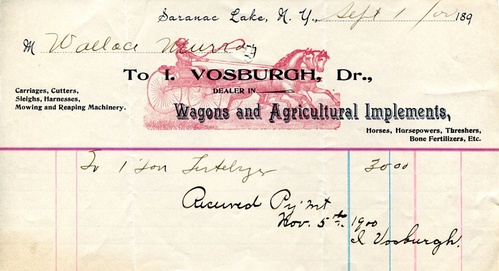 A statement from I. Vosburgh, Wagons and Agricultural Implements to Wallace Murray, November 5, 1900

WAS PROMINENT FIGURE IN ADIRONDACKS

Another prominent figure in the history of the Adirondacks has passed into the Great Beyond with the death of Isaiah Vosburgh, former president of Saranac Lake, whose life had been identified in every way with every phase of life and development in the Adirondacks.

From the early days of the stage, when Mr. Vosburgh drove for Virge Bartlett, thru the successive periods, in which he rose thru many positions of civic life to the head of the village, his life represents a romance of the period in which he lived.

Mr. Vosburgh passed away last Thursday, as a direct result of a paralytic stroke which he suffered four years ago. He had been confined to bed continually, and gradually declined during the past winter.

Funeral services were held from his late home on Saturday afternoon and were conducted by Rev. E. P. Miller, rector of the Church of St. Luke, the Beloved Physician. Interment was made in Pine Ridge Cemetery. Surviving him are one son, Allen I. Vosburgh, of Lake Clear; a daughter, Mrs. Rogene T. Tremble, of Saranac Lake, and two grandchildren, Maurice A. Vosburgh and Alice M. Vosburgh.

Isaiah Vosburgh was born in Alburg, Vt., on February 1, 1845, and came to this part of New York state at the age of 16, beginning work for Virge Bartlett at the then famous Bartlett's Inn. After that he drove the stage for his employer from Bartlett's Carry to Ausable Forks and Keeseville, and for a time the mail boat on the Saranac River.

In 1868, he married Alice M. Minner, of West Georgia, Vermont, purchasing a farm near Loon Lake, which he operated for about two years. The call of the woods life came to him again, however, and he returned to his beloved Saranac waters, conducting the guide house at Martin's hotel until 1878,

At that time he again purchased a farm in West Harrietstown, where he remained until 1895 with only one interruption. In 1880 he purchased a hotel at Franklin Falls, and had been operating it successfully for ten months when his health failed and he returned to the farm.

In 1895, he moved to Saranac Lake, where he resided continuously until his death. At the outset, he took an active part in village affairs, and became a leader in political life. Before coming to Saranac Lake permanently, he served 22 years as a game protector and a like length of time as assessor of the town of Harrietstown.

In 1895, he was made a member of the board of education, serving until 1907. He was again a member from 1914 to 1920. His services in the office of street commissioner, brought recognition when a vacancy was to be filled on the village board in 1907, and in 1908 he was chosen village president, being returned to this office in 1909, 1911, 1917, 1918 and 1920. In intervening years he served several terms as a member and sometimes chairman of the board of water and sewer commissioners.

During the world war he was made chairman of the draft board, into which task he entered with such energy that those who were close to him believe he suffered a serious lowering of vitality, which brought about his subsequent enfeeblement much sooner than would otherwise have occurred.

The last years of his life were spent in cheerful companionship with scores of friends, who became attached to him thru contact with one or another of the phases of his many sided life. Often his counsel during these years has helped to guide local affairs thru the channels of normalcy and sanity.