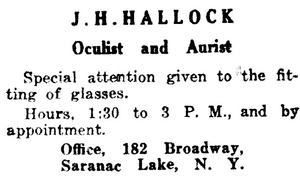 Dr. John Henry Hallock of 182 Broadway was a retired specialist in eye, ear, nose and throat medicine when he died at age 90.

Given six months to live by city doctors, Dr. John Henry Hallock came to this village for his health over 50 years ago from Syracuse, settled here and today celebrates his 90th birthday.

Now retired, the doctor for many years carried on an eye, ear, nose and throat practice in the village of Saranac Lake. He makes his home at 182 Broadway.

Before coming to Saranac Lake Dr. Hallock was a member of the medical staff at the House of Good Shepard [sic: Shepherd] , Syracuse. When his health failed, he and his wife, who died several years ago, moved to this village.

As his health improved, the doctor opened and increased a private practice in this village. His son, Harrison, was educated here and now makes his home at 16 McClelland street.

Dr. John Henry Hallock, 90, one of Saranac Lake's oldest and longest residents passed away about 5 o'clock this morning at his home at 182 Broadway. He was taken ill last Thursday night.

Given six months to live by city doctors in 1888 when Dr. Hallock came to Saranac Lake from Syracuse, the former eye, ear, nose and throat physician completely outwitted fate and continued to practice medicine in the village for many years.

Before coming to Saranac Lake Dr. Hallock was a member of the medical staff at the House of Good Shepard [sic: Shepherd] in Syracuse. When his health failed, he and his wife the former Miss Ada Merrils, who died several years ago, took up residence in this village.

As his health returned, the doctor opened and increased a private practice here. He retired several years ago and continued to make his home at 182 Broadway.

Dr. Hallock was born in Ithaca, the son of the late John and Nina Marcha. His birthday was March 13, 1858.