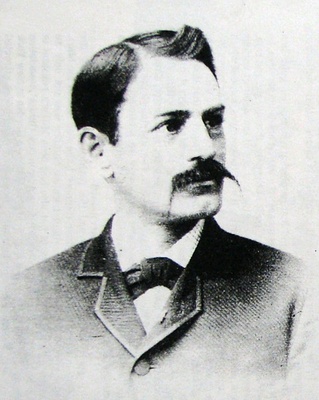 J. Herbert Miller was the son of Van Buren Miller. He was a Democratic party leader and the supervisor of the Town of Harrietstown from 1884 to 1886, when construction of the original Harrietstown Town Hall was being planned. He was also a guide, and a leader of the Adirondack Guides' Association, serving as the first secretary of the organization.

We learn with regret of the death of ex-Supervisor J. Herbert Miller, of Saranac Lake, which occurred at his home in that village on Thursday night of last week. He was the eldest son of the late Van Buren Miller, of Harrietstown, and like his father adopted the profession of civil engineer and surveyor. In addition to representing his town for several terms on the board of supervisors be served the village of Saranac Lake as postmaster, being appointed by President Cleveland during his first term from 1884 to 1888. He was an active, energetic citizen, always interested in any project to increase the prosperity of the locality where he resided and was well and favorably known throughout the Adirondacks by summer visitors and permanent residents alike. He was a leading member of the Adirondack Guides' Association and acted as the association's secretary at the time of its organization, and was also actively interested in all plans for the preservation and protection of fish and game and the establishment of a State parks with which subjects he was thoroughly familiar, possessing much practical knowledge of the woods and of Adirondack lands. In politics he was an unswerving Democrat and in private life a kindly and genial companion and friend. He leaves surviving a widow and three children, besides a mother, brother and sister. His age was 38 years.

From the Adirondack Daily Enterprise, June 18, 1987

Heyday of the guides

The choosing of J. Herbert Miller to serve as secretary was a very wise move. He possessed all the political skills that could further the cause, having been town clerk, town supervisor, and had been named postmaster by Presdient Grover Cleveland. He sent out thousands of circulars and brochures describing the aims of the association and managed a very successful membership campaign. A great grandson of Capt. Pliny Miller, he was highly respected in the community and had gained the complete confidence of the native guides.