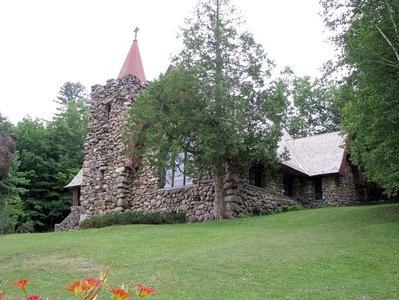 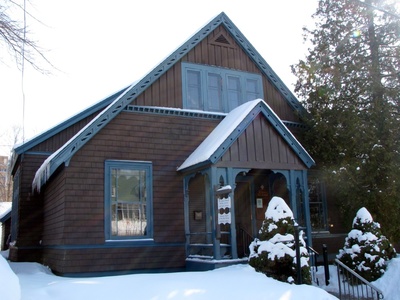 He was also Dr. E.L. Trudeau's cousin. He donated plans for many of the buildings at the Adirondack Cottage Sanitarium, including the Baker Memorial Chapel, with William L. Coulter; he designed the Saranac Laboratory, St. Luke's Parish House, St. Luke's Rectory, and he added a transept on each side and enlarged the chancel of St. John's in the Wilderness. 2 According to his personal card presented at the cornerstone laying, J. Lawrence Aspinwall was the architect for Stony Wold Sanatorium. Trudeau encouraged Elizabeth Newcomb to build Stony Wold Sanatorium, and helped set out the plan for its buildings. The design for Stony Wold was done by the firm Renwick, Aspinwall and Owen, and Aspinwall was present for the cornerstone ceremony on September 11, 1902; he was probably the chief architect for the Sanatorium. Another card presented at the cornerstone laying was another one of Aspinwall’s, with “W.L. Coulter Supervising Archit Sept 11 1902” written on the back. William L. Coulter was a well known architect of Saranac Lake, for whom Aspinwall had served as a mentor. Aspinwall was honored as a Fellow in the American Institute of Architects in 1914, and was the executor of his cousin E. L. Trudeau's will when he died in 1915.

1. Archinform.net
2. St. Johns in the Wilderness, Town of Brighton