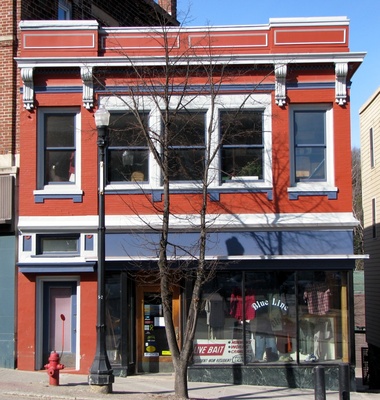 It is a peculiar, L-shaped lot. The end of the short leg of this "L" abuts the rear portion of the north line of the Kendall lot so that, when Jack built his building the following year, all access except via the front was eliminated from 84 Main Street.

Presently, little is known about Mr. Jack or what kind of business first occupied the storefront of the "Jack Block", as it is referred to in county documents. 1

In 1917, the Adirondack Art Store, Inc., of E. B. Hay and Bertrand H. Gray, leased the space after E. J. Kennedy bought the Harding Block, their original location, at 89 Main Street "Hay and Gray", as it was called was the number one art and craft supply store in the village at the time; and Gray was evidently a close friend of Jack as he was a witness to the signing of Jack's will.

William Jack died in 1918, and in August of that year, his widow Cora B. Jack, sold the building to Rose Bruzza for $12,500 — Hay and Gray having refused their option on the property.

The Bruzzas had become rather wealthy as a result of the success of the Bruzza Confectionery in the Roberts Block, and they began to acquire a number of valuable properties. Aside from the Jack Block, they also bought the Fowler Post Office Block at 69 Main St. and the Linwood Cottage at approximately 55 Main Street. The Linwood was the best known cure cottage at that time, at least in the downtown area, and it was renowned for its food.

In the old Hay and Gray space, Mr. Commo operated the C.C. Studio, an art and photography supply store and photo studio, until his death nearly twenty years later.

In December, 1973, the property was acquired from the Leo Commo estate by the Village of Saranac Lake for unpaid taxes. It was purchased from the Village by William D. and Helen LaVien for $7,000 in January, 1975. By then the building was in a serious state of disrepair. The LaViens made some improvements but sold in October, 1975, to Wilson Clothing Company which totally rehabilitated the structure and opened their ladies' shop therein.

The second floor is leased as a residence.

This two-story, brick, L-shaped building has a rather massive facade treatment in proportion to the space involved. The use of narrow facing brick (once blond but now painted a muted, pale green) further accentuates the effect achieved by the separate facade elements.

At ground floor level, most of the space is occupied by large display windows that rise above a base of dark green marble panels. The doors and doorways to both the storefront and the second-floor residence are of oak with brass plates protecting the doors" bottom-rails. The residence door is transomed, but below the transom is a simple but thick cornice supported by two hefty, scrolled consoles.

Above the doorway transom light and running above those that top the display windows is another simple cornice, rather thin.

Then comes the second story with its narrow-brick facing. The central three-fifths of its width is set slightly back from the outer fifth to each side. A three part (vertically divided) sash window ensemble occupies the entire span of this central section. The lower sashes are twice the height of the upper sashes. The outer fifths of the façade are each occupied by a lone, sash window, the upper edges of which are each flanked by a pair of very tall, scrolled consoles.

The consoles support a substantial cornice that wraps around partly onto the building's north wall and is underscored by approximately 90 dentils. Above the cornice is a massive parapet conforming to the inset design of the facade below.

All of the facade trim is painted white and all, except around the windows, is of galvanized metal.

The rest of the building is solid and business-like. It has a poured concrete foundation. Most of the windows in the north and rear walls are under relieving arches.

Saranac Lake is in luck and will have a $30,000 theatre 90x60 feet in dimensions, with a seating capacity of 750, including the main floor and balcony. It will be constructed by W. H. Jack on the Fowler property and ground will be broken in April.

Leo Commo announced today that he had purchased the business block at 2 Broadway from the Bruzza Estate.

The building was built originally by Hay and Jack and purchased by the Bruzzas in 1918. Under the proprietorshp of Hay and Jack, it housed the Adirondack Art Store, owned by them, and later the Western Union had offices there for many years.

For 35 years, Mr. Commo has been proprietor of the C. C. Studio, now located in the Broadway Building. He does not plan any extensive alterations except general repair and decoration.