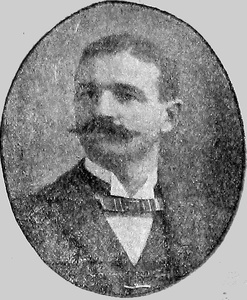 John Carrier, known as Jack, was a partner of William Edgar Trombley in Trombley & Carrier's, which was a general contracting firm and operated a mill that produced sash and trim, along with timber and siding. He was raised as a Quaker.

Born in Chatham, New York, he came to Franklin County in 1886, where he was employed by the Santa Clara Lumber Company, and the Shanley and Alfred Lumber Company; later, he was employed for nine years by Paul Smith's Hotel. He was active in Republican politics, and served as Brighton Town Supervisor from 1898 to 1901, at which time he moved to Saranac Lake where he formed a partnership with Trombley. He served two terms as a village trustee, his terms starting in 1902 and 1907. He lived at 33 Franklin Avenue.

He moved to Spokane, Washington in 1911, and then to San Diego, California, in 1912, where he worked for Pacific Lumber Company.

John Carrier, formerly of Saranac Lake, died on Tuesday at San Diego, Cal., following an illness of heart disease. Mr. Carrier resided in California about two years. During the last few weeks he had been ill of heart trouble and although every attention was devoted to his case, his death occurred on Tuesday.

Mr. Carrier was for many years a prominent resident of Saranac Lake. He was a member of the firm of Trombley & Carrier, contractors and builders, and was actively interested in the business and social development of the village and the region surrounding it.

Born at Chatham, Columbia County, N. Y., he removed with his parents in early life to Albany, where he attended the public schools and later the high school of that city. After leaving school he traveled for six years in various parts of the western states.

In 1886, Mr. Carrier came to Franklin county, where he almost immediately made an engagement with the Santa Clara Lumber Co., assisting that firm in its general store at St. Regis Falls. Later he was employed in the Shanley & Alfred Lumber Co. and for nine years was with the Paul Smith Hotel as cashier.

While at Paul Smiths Mr. Carrier was elected supervisor of the Town of Brighton on the Republican ticket and served during the years of 1898-1901, and was one of the most popular members of that body of legislators, always having assignments on important committees.

Mr. Carrier removed to Saranac Lake in 1901 and entered into partnership with W. Edgar Trombley under the firm name of Trombley & Carrier, in the manufacture and sale of lumber and all kinds of building material, including windows, doors, sash, blinds, etc.

Appreciating his ability as a public official, the electors of the village urged him to accept village offices and he served as trustee two terms, entering upon his first term in 1902 and on the second in 1907.

Beloved By All men.

John Carrier was greatly beloved by the men of the region who came to know him personally and who grew to appreciate the clean and manly attributes of his mind and life. He met with business reverses that involved his own savings and which also embarrassed his associates, Frank J. LaBounty and L. B. Parker, who entered the firm of Trombley & Carrier following the death of Mr. Trombley, when the firm became known as Trombley & Carrier, Inc.

Mr. Carrier never fully recovered from the shock and trials of that time. He went west and traveled to the Columbia River country. He described his travels in letters to The Adirondack Enterprise; travels which led him to California, and throughout his letters, especially his personal letters, he showed that he was homesick for the region and the village in which he had resided for so many years and where his hopes were blasted and buried. John Carrier was heart broken over his business disaster and he never recovered.  Men believed in John Carrier and he believed in the manliness of men. His departure from Saranac Lake was a lonely leave taking. Should his remains be  brought back for interment here which is undecided at this time, the entire community will pay homage to one of Saranac Lake's sincerest and best citizens.

John Carrier wanted the people of his place of adopted residence to work together, to work for the proper entertainment of the visitor and for the upbuilding of Saranac Lake, and he expressed himself admirably at a banquet of the Saranac Lake Board of Trade in 1906 when he made a deep impression by one of the best after dinner addresses that has ever been made here. It is as follows:

"In the endeavor to establish ourselves upon a permanent basis, to get the things absolutely necessary for our well being and comfort, we have been so much occupied that scant time has been left us to devote to recreation The little of it that we have enjoyed has been the result of chance rather than design, but I believe we have reached a point where we must seriously consider some means of providing amusements for the health seekers and their friends who reside here. If we stop to consider the position of the average visitor here we will realize that his lot is not altogether a happy one. Taken, perhaps, from a life of activity to one of absolute quiet, away from his home, friends and all his vital interests and placed among strangers, it is small wonder that he suffers from homesickness, and that his view of Saranac Lake is not rose colored. If we want his good will, if we want him to help advertise our village as a desirable place of residence, we must divert his mind as much as possible from the contemplation of his ills, and help him to remember that he is here not only for the benefit of his health, but also to have a good time. Something has been done toward this end by the gentlemen of the Pontiac Club, who are entitled to much credit for their efforts, and by the promoters of our winter races; and we have all helped a little at carnival time; but our efforts for the most part have been intermittent, and we need now a united and continuous endeavor toward the establishment of permanent means of recreation for both summer and winter. And let us now remember, too, that the only means our visitors have of knowing the kind of people we really are is by our manner toward them. All of us are busy; but none of us is too busy to speak a pleasant word or go a little out of the way to do a kind act for any stranger with us whenever opportunity offers. Let us be careful to show the sympathy and good will we really feel, and so prove we are actually interested in the welfare of our transient friends.

His Ideals of Living.

"And nothing can go further toward making us pull together than the cultivation of social relations outside of business hours; occasions like this should be more frequent; some means should be devised whereby we can meet in a social way; where we can for a time forget the struggle for bread and butter or that there is such a thing as competition except competition in friendliness, and remember only that we are good friends as well as fellow citizens.

"Like a number of twigs, any one of which alone can easily be broken, but which when bound together have great strength, so let us bind ourselves together with the bonds of charity and good fellowship, and faith in each other and the future of our village, that, when difficulties arise we may have strength to meet and overcome them."

The deceased married Mrs. Mary Smith, who survives. She was at the bedside throughout Mr. Carrier's illness and in making the arrangements for interment. There also survive two sisters, Miss Helen Carrier and Mrs. Rebecca Patten of Albany, a son, Dean, and a stepdaughter, Miss Blanche Smith. Mr. Carrier was a member of Whiteface Lodge, F. A. M. of Saranac Lake.